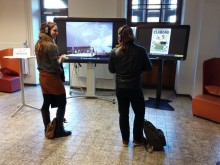 By Clarissa Colangelo, KU Leuven. As the new semester begins here at KU Leuven, we have kicked it off with a small surprise for the students: from the 13th until the 15th of February, two Pop-Up Museum photographic exhibitions have been on display in Agora, … END_OF_DOCUMENT_TOKEN_TO_BE_REPLACED 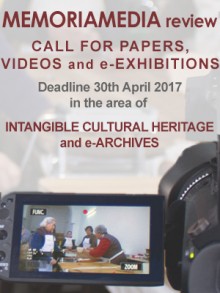 Deadline 30th April 2017
Call for PAPERS, VIDEOS and e-EXHIBITIONS in the area of INTANGIBLE CULTURAL HERITAGE and e-ARCHIVES

MEMORIAMEDIA (MI/IELT) has a peer reviewed e-journal dedicated to promote, communicate and document projects, studies and archives of Intangible Cultural Heritage (ICH). Authors are now invited to submit unpublished papers, videos or e-exhibitions about all the domains of ICH: oral traditions, performative … END_OF_DOCUMENT_TOKEN_TO_BE_REPLACED

Making use of the open licence of the Photomediations book, the Danish journal and website BAGGRUND has translated chapter 1 about optics and light.
Photomediations in Danish language

organized by Cultural Studies, another pop-up exhibition of Europeana Space is taking place for a limited period in Leuven
Pop-Up Museum on the Belle Epoque

KU Leuven hosts the Europeana Space Pop-Up Museum on the Belle Epoque at Agora KU Leuven. It is on display at the TimeOut Zone near the entrance. Bring your smartphone and earphones for the full experience! Only until Wednesday 15/2!

WikiCite 2017 is a 3-day conference, summit and hack day to be hosted in Vienna, Austria, on May 23-25, 2017. It expands on efforts started last year at WikiCite 2016 to design a central bibliographic repository, as well as tools … END_OF_DOCUMENT_TOKEN_TO_BE_REPLACED

Appointed by the European Commission, Ars Electronica, BOZAR and Waag Society are launching a prize to select the most pioneering collaborations and results in the field of creativity and innovation at the crossings of science and technology with the arts. … END_OF_DOCUMENT_TOKEN_TO_BE_REPLACED

as an additional outcome of E-Space project, a useful How-To booklet about hackathons
Learn from the E-Space Hackathons experience

The holding of hackathons is a popular and already well-established activity that offers industries the possibility to gather people enthusiastic to develop new ideas. The E-Space project took up this concept and developed it further, re-conceptualising the meaning of ‘hackathon’ in … END_OF_DOCUMENT_TOKEN_TO_BE_REPLACED

a Memorandum of Understanding is launched after the end of the EU funding period, to continue the work done so far with E-Space
E-Space Initiative: Where Culture Meets Creativity

As the EU-funded project ends on 31 January 2017, the partners, affiliate partners and followers of the E-Space project are invited to join the MoU for the E-Space initiative “E-Space: Where Culture meets Creativity”. LEARN MORE: http://www.europeana-space.eu/network/e-space-initiative/ The partnership’s main objective … END_OF_DOCUMENT_TOKEN_TO_BE_REPLACED