Pundit for Digital Humanities, by Net7

The open source semantic annotation tool Pundit is Net7’s main product for the Digital Humanities. The main idea behind semantic annotation is to enable users not only to comment, bookmark or tag web pages, but also to semantically create structured data while annotating. The ability to express semantically typed relations among resources, relying on ontologies and specific vocabularies, not only enables users to express unambiguous and precise semantics, but also, more interestingly, fosters the reuse of such knowledge within other web applications.

Pundit allows annotators to include machine-readable semantics in their annotations, by setting up links to the web of data and by collaboratively building a knowledge graph that connects and contextualizes (unstructured) web content.

Pundit enables this structured knowledge to emerge in online communities so that a variety of applications can exploit it by, for example, providing a powerful semantic search, building innovative ad-hoc data visualizations or improving the way scholars explore the web. 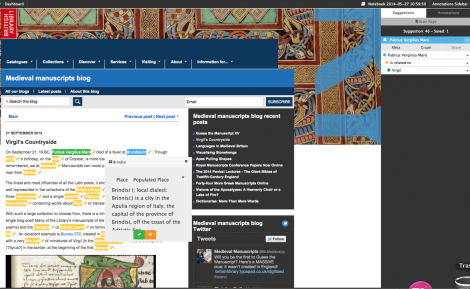 Pundit in action: a web page from the British Library’s “Medieval manuscripts blog” is being annotated using the “Annomatic” functionality. Annomatic enables automatic entity recognition, while matched entities can be confirmed or rejected before being saved as annotations.

Pundit  aims to be part of an advanced research ecosystem, of which semantic enrichment and data curation are fundamental steps. Thus, the goal of the StoM project is to create a software-as-a-service platform named PunditBrain. PunditBrain is aimed mainly at scholars, journalists and students but will also perfectly fit into corporate environments, where document collection and consumption lie at the heart of their work.

It will be a web-based service, which will allow users to apply semantic annotations on web documents. Using the Pundit technology as its foundation stone, PunditBrain will focus on usability. Annotating will be similar to highlighting text in documents: for example highlighting with different colors could be used to add different specific semantics to the text.

Net7 develops advanced tools for academic research in the Cultural Heritage and the Digital Humanities domain. In fact the company is based in Pisa, Tuscany, at the heart of a region with a high density of excellent research institutions including the Italian National Research Council, the University of Pisa, Scuola Normale Superiore and Scuola Superiore Sant’Anna.

At present, Net7 is a partner in two European-related projects (DM2E and Europeana Sounds), three ERC-funded projects (EUROCORR and ERC AdG 2011 – LookingAtWords) and in a Dissemination project (StoM – SemLib to Market). Since 2014 Net7 is also associate partner of the RICHES project.