a promo video explains all you need to know about this amazing investigation technique, to discover details invisible at human eye

RICH (REFLECTANCE IMAGING FOR CULTURAL HERITAGE) is a project by Illuminare, Centre for the Study of Medieval Art, KU Leuven, in collaboration with ESAT, and is developing an imaging tool for research, study, and exploration of the material characteristics of graphic materials produced in medieval and early modern times. The tool is called Portable Light Dome. 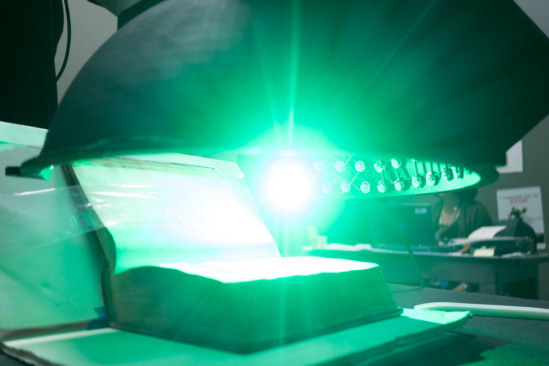 The tool is equipped with 228 different LED lamps. Five different spectra are evenly distributed over the dome: UV at 365 nm, Blue at 460 nm, Red at 523 nm, Green at 623 nm and IR at 850 nm. A black and white sensor of 28 Mp with extended sensitivity in UV and IR is mounted on top of the dome.

With the minidome, the topography of medieval book illuminations, stamps, inks, seals and bookbinding stamps is visualized and monitored in +2D. Further developments of the tool are foreseen.

This amazing technology has been used not only on the precious medieval manuscripts preserved at KU Leuven’s library but also on ancient papyrus documents and archaelogical objects; further, a collaboration with University of Amsterdam allowed the RICH team to monitor historic bookbindings (16th – 19th century) with delicate needlework on velvet, silk and satin.

In collaboration with the RICH project and the ESAT labs, the Royal Museums of Art and History coordinates a pioneer project in which the multi-light Portable Light Dome is transformed into a Multi Spectral dome equipped with IR, Red, Green, Blue and UV LED light sources. This short video demonstrates the acquisition process with the fist developed MS microdome prototype of a Fayum mummy portrait (Egypt, Roman era) at the Brussels museum.

Also, between 27th January and 3rd February 2016, the RICH team has been working together with the scientists and conservators of the J.P. Getty Museum and Research Institute in Los Angeles. Various artifacts of the Museum collection have been monitored and studied with Photometric Stereo such as medieval manuscripts, master drawings, bookbindings and daguerreotypes.