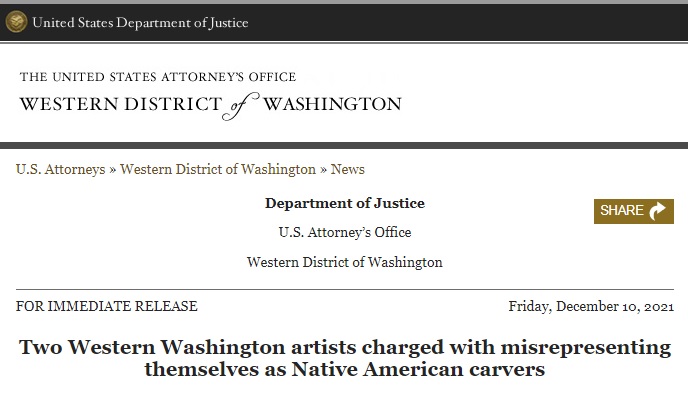 In two separate criminal cases, Western Washington artists are charged with violating the Indian Arts and Crafts Act (IACA) by representing themselves as Native American artists, when they have no tribal membership or heritage, announced U.S. Attorney Nick Brown.  The men, 52-year-old Lewis Anthony Rath, of Maple Falls, Washington, and 67-year-old Jerry Chris Van Dyke aka Jerry Witten, of Seattle, made their initial appearance on the complaints in U.S. District Court in Seattle in December 2021.

The investigation of Jerry Van Dyke began in February 2019, when the Indian Arts and Crafts Board received a complaint that Van Dyke was representing himself as a Nez Perce Indian Artist, when in fact, he is not an enrolled tribal member. Investigators from the U.S. Fish and Wildlife Service made undercover purchases at a gallery in the Pike Place Market area of Seattle that advertised pendants Van Dyke had made as Native American Art.  Van Dyke used the name Witten for these sales.  When interviewed by agents, Van Dyke admitted knowing about the Indian Arts and Crafts Act, and admitted he was not a tribal member.  Through the gallery Van Dyke had sold more than $1,000 worth of carved pendants represented as Native American artwork based on Aleut masks. Van Dyke is charged with two counts of Misrepresentation of Indian Produced Goods and Products.

The investigation of Anthony Rath began in May 2019, after a complaint to the Indian Arts and Crafts Board.  The investigation revealed that Rath falsely represented himself to be a member of the San Carlos Apache Tribe. Undercover agents purchased a carved totem pole and necklace from the same Pike Place Market gallery for more than $1,334.  Agents noticed the gallery had other carvings by Rath that were represented as Native produced.  At another shop on the Seattle waterfront agents purchased another carved totem pole and a mask, again represented to be Indian produced.  The biography of the artist at both shops falsely claimed that Rath was Native American.  Internet sites Rath used to sell his artwork also falsely claim he is an enrolled member of the San Carlos Apache Tribe.

When agents executed a search warrant on Rath’s Whatcom County home and studio, they found he also possessed feathers from protected birds: golden eagles and other migratory birds such as hawks, jays, owls and more. Rath is charged with four counts of Misrepresentation of Indian Produced Goods and Products, one misdemeanor count of Unlawful Possession of Golden Eagles Parts and one misdemeanor count of Unlawful Possession of Migratory Bird Parts.

The charges contained in the complaints are only allegations.  A person is presumed innocent unless and until he or she is proven guilty beyond a reasonable doubt in a court of law.

Press contact for the U.S. Attorney’s Office is Communications Director Emily Langlie at (206) 553-4110 or Emily.Langlie@usdoj.gov.