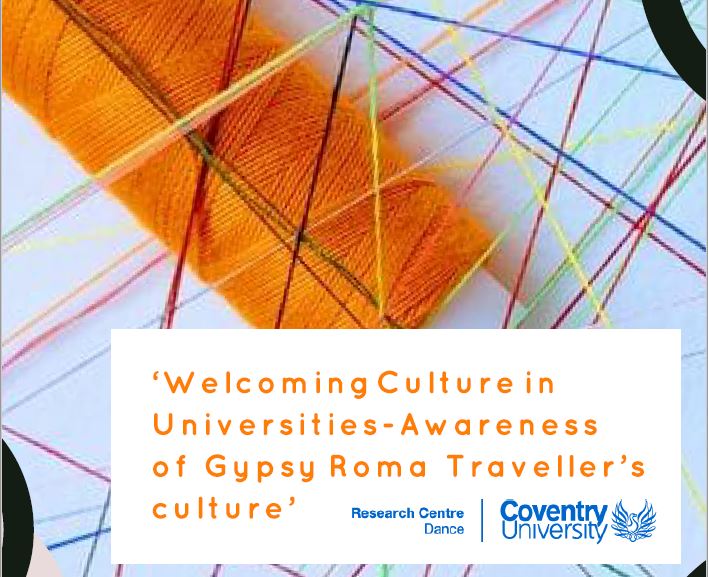 The Gypsy Roma Traveller in Higher Education- Influencing Policy is a research project concluded the 31st March 2020 and funded by QR Strategic Priorities Fund 2019-20 and Coventry University Centre for Dance Research.
Focus of the project was to concern policy makers about the barriers faced by GRT in accessing Higher Education and collect new evidence for influencing political outputs.
The research brought together GRT and non-GRT academics and artists in partnership with policymakers, for better understand local, regional or national challenges.
The main activities included in the project consisted of a one-day symposium and two art exhibitions which allowed the research team to draw upon its institutional expertise given the networks which already exist, for example working with NGOs, other UK universities and collaboration with local academics and artists.
The initial exhibition was Ex Libris, a visual collection created by British Gypsy artist Daniel Baker and played with the tension that exists at the university. The second exhibition, Generations was curated by Rosa Cisneros from Coventry University’s Centre for Dance Research and brought together local photographer Antony Weir and the Roma Project charity.
The exhibitions include films, images and cultural heritage artefacts from the GRT community members involved in the project and also feed into thinking around how to make universities more culturally welcoming to marginalised communities.
Careful consideration was placed on the visualisations that are associated with the GRT community. Special attention and care went into the two social media campaigns that were linked to the project. The #GRT #PrideInArt PI produced material that serves as a counternarrative to the erroneous images that often circulate social media and mainstream channels. Three films were created, and one aligned with the international Women’s Day Campaign #EachforEqual. The films and project were picked up the BBC- Coventry, Coventry.
The findings feed directly into a follow up to the GRT in HE report drafted with Baroness Whitaker from Westminster in November 2019 and led by Professor Margaret Greenfields from Buckinghamshire New University (BUCKS).
Links to the films:
•GRT in HE Film- Highlights film from the Feb 27th workshop held at Coventry University: https://www.youtube.com/watch?v=FvpTuA151WU&t=9s
•#EachforEqual campaign film link: https://www.youtube.com/watch?v=pegMEihVMRc
•Generations film link: https://www.youtube.com/watch?v=rBaSUWGTOx0&t=2s
Read the full report here.