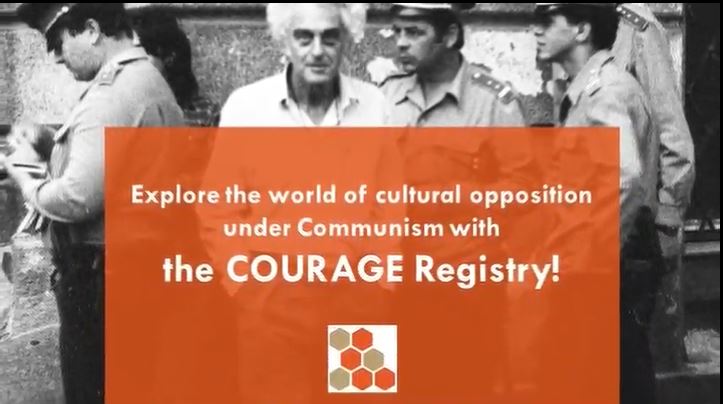 The COURAGE project (Cultural Opposition – Understanding the CultuRal HeritAGE of Dissent in the Former Socialist Countries) is an international research project funded by Horizon 2020, it studied the role of culture in opposing authoritarian regimes and the efforts to preserve the memory and material heritage of cultural opposition to communist rule in most countries of Eastern and South-Eastern Europe.
It has just finished its action and has producted its Policy Brief titled “Learning from the History of Dissent in Communism to Foster a Shared European Memory of Freedom Practices” where suggest political action.

The heritage of cultural opposition against state socialism is an important resource for social reflection and innovation in Europe and the neo-authoritarian tendencies in Eastern and South-Eastern Europe have made urgent the enhancement of the heritage and the memory of the opposition.
However, as COURAGE has shown, this resource needs to be better acknowledged, and its significant symbolic power should be better exploited.

COURAGE has collected in unique repository, the first transnational digital database (COURAGE registry) the collections on cultural opposition, discovering also many small and previously unknown collections that prove that for a full understanding of the past, one must look beyond official accounts. The research showed the diversity of the stakeholders and the diversity of the forms of their collections that reflect the multitude of actors engaged in activities to preserve cultural heritage.

COURAGE identified many problem areas:
the lack of funds is the most common problem: culture occupies very different places on the list of priorities of national governments and most of them allocate very limited means to culture;
a further problem is the risk that only a certain version of the past will be officially promoted.

COURAGE has shown the importance and limits of digitalization:
it facilitates cross-country exchange and communication, opens new forms of access and engages new audiences and it can be an effective instrument of democratisation; at the same time, the importance of professional conservation and documentation of artifacts for research purposes should not be underestimated.

COURAGE highlights the importance of research and scholarship in the humanities for reflective societies; its research strengthens self-reflective social consciousness by showing how narratives of the past have been constructed and manipulated, and that there is not one “truth.” The diversity of cultural heritage can tell us about different historical experiences and the relativity of our own traditions, but it to fulfil that role, cultural heritage must be critically assessed and professionally preserved.
One of the main conclusions of the project is that the memory of opposition is an important field of co-production and citizen science; the project emphasizes the importance of collaborative approaches to the study of this field; the potential of this approach has not been fully exploited and could produce new insights and a further understanding of this aspect of Europe’s shared history.