Outstanding workshop on Resilient Cultural Heritage for the REACH Project 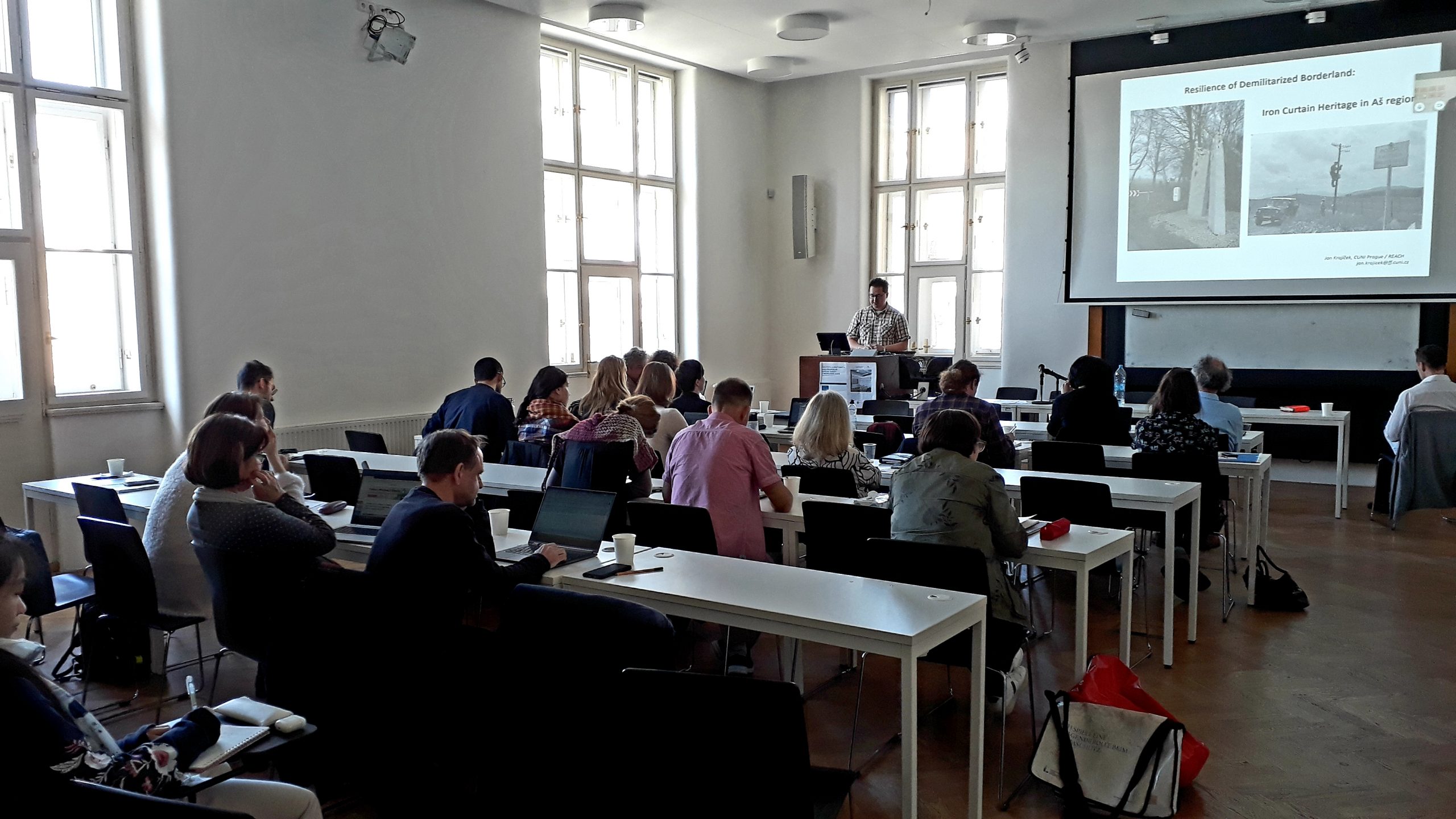 The Resilience for Cultural Heritage workshop, organised and hosted by Charles University, took place in Prague on 5 and 6 March 2020. One of the objectives of the REACH project has been to test the concept of resilient cultural heritage through its four pilot and programme of themed workshops. In addition to continuing the project’s participatory theme, this workshop considered the different interpretations of resilience within the fields of cultural and heritage, involving a series of varied and fascinating presentations and vibrant debate.
Following an introduction from Project Coordinator Neil Forbes, Hana Cervinkova opened proceedings with her presentation ‘Unpacking Resilience in the Context of Jewish Urban Material Heritage in Contemporary Poland’ which described the importance of preservation of Jewish graveyards in Polish cities, where their heritage would otherwise have been forgotten. She was followed by Alexandra Bitušíková’s ‘Strengthening Community Resilience to Extremism: heritage as a resilience tool’ in which she described the reaction of local communities to the shock election of a Neo-Nazi as regional governor in Banska Bystrica and how the community came together to stand-up for its values and reclaim their cultural heritage from the populists. 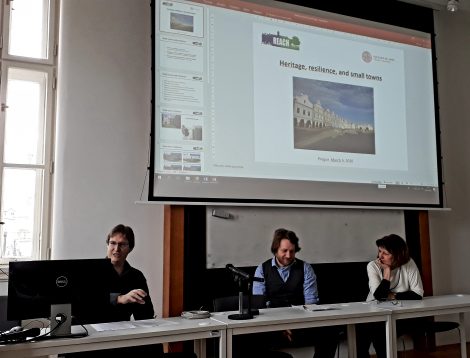 The next session began with a joint presentation ‘Rural landscape as heritage: a tool for building resilience in the context of disturbances affecting small towns’ from Paola Branduini and Fabio Carnelli. This outlined and contrasted two Italian cases, the first of was of protest against the building of an airport road that would destroy valuable rural heritage and the second was of how a town recovered from the devastation of an earthquake. Jan Krajíček’s ‘Resilience of de-militarized borderland: Iron Curtain heritage in Aš region’ detailed the unwanted heritage and remnants of the Iron Curtain’s infrastructure that had divided and changed communities and how it is now being re-evaluated. Finally, Zdeněk Uherek shared his ‘Resilience in the urban environment from the socio-anthropological perspective’ that returned to earlier themes such as groups no longer living in areas, and their history not being remembered by the current communities. Resilience here is the question of saving the heritage of one group from another, which could be as a result of living through regime change, maintaining heritage, but also assimilating direct or indirect influences on beliefs and infrastructure.
After lunch, Mirela Tase and Natalia Linitskaya made presentations that described ‘Difficult Heritage’. The former presented ‘The public perception of Communist heritage in post-communist Albania’ which considered the built heritage that remains in Tirana and the ongoing debate of what should be done with it; should society move on from its past or should the buildings stand, so that people do not forget? The latter discussed ‘Protecting the Tractor makers’ Neighbourhood in Minsk: Civil Activism with Lack of Civil Rights’ in which Natalie presented plans and images of the communist districts that were built for workers when the factories were opened, considering current perceptions and legacy. 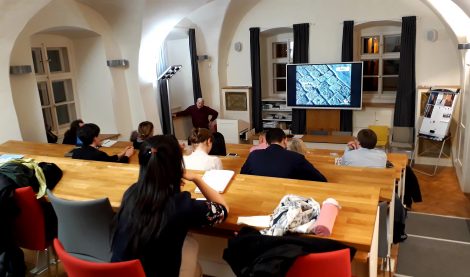 The final session of the day examined resilience within the scope of institutions and heritage. Richard Biegel stepped in to describe the progression of the Charles University’s ‘Art History Department – University´s Cultural Heritage’, illustrating that institutions would have had to have been resilient to operate, in spite of multiple socio-political regime changes, during the 20th Century. Eva Špačková provide insight into the ‘University Museum as a source for creative interactions in arts, science and technology (case of Iowa University Museum)’ and asked whether European universities could also display more works of art. Finally, keynote speaker Thorsten Ludwig, managing director of Interpret Europe, concluded the day with  a presentation on ‘Engaging citizens with Europe’s cultural heritage‘ with special emphasis on UNESCO’s values and learning principles’ that led to an interesting discussion about the values and messages that heritage sites can share and the best ways that narratives can be framed.
The second day of the workshop concentrated on the four pilots of the REACH project, as they shared their results and considered resilience related findings. 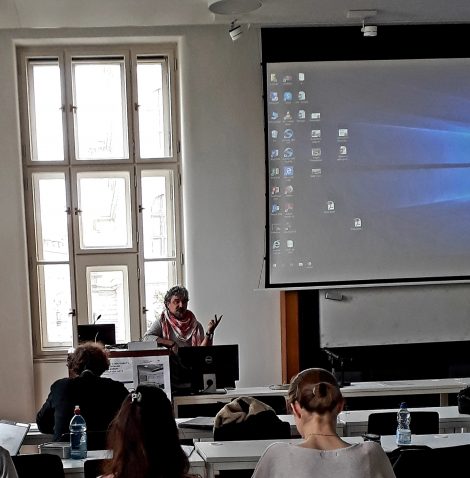 For the Rural heritage pilot, José-Maria Civantos discussed that, in the face of global change (political, social and economic), resilience has been the understanding and adaptation of traditional community methods of preservation and management to maintain systems and crops, achieved by giving farmers a stronger platform and way to be heard.
Gábor Oláh and Eszter György followed, with a description of the Minority Heritage pilot and particularly Roma heritage in Hungary. Through three local encounters, in rural, urban and school settings, they were able to bring stakeholders together that would normally not meet and to encourage future partnership developments that could empower Roma communities.

The Small Towns’ heritage pilot’s presentation involved Alexandra Bitušíková, Jira Janáč and Jaroslav Ira and also touched on the impact of global and urban change, which includes young people leaving for cities and towns stagnating. Towns need to reinvent themselves and their identities, which has led to (award winning) regeneration, bringing increased tourism, but was this done with the agreement of residents and are they happy with the results?

Finally, Frederike Berlekamp discussed the Institutional heritage pilot, which had involved work with three diverse museums. At a time when museums are literally redefining themselves, considering who their audiences are and their expectations, museums are developing new partnership, methods, layouts and more interactive personalised services.
After a day and a half of interesting and informative presentations that considered resilience within cultural heritage in a number of ways, there was consensus from all present that this had been a really valuable event.