Introductory meeting for the minority heritage pilot of REACH Project 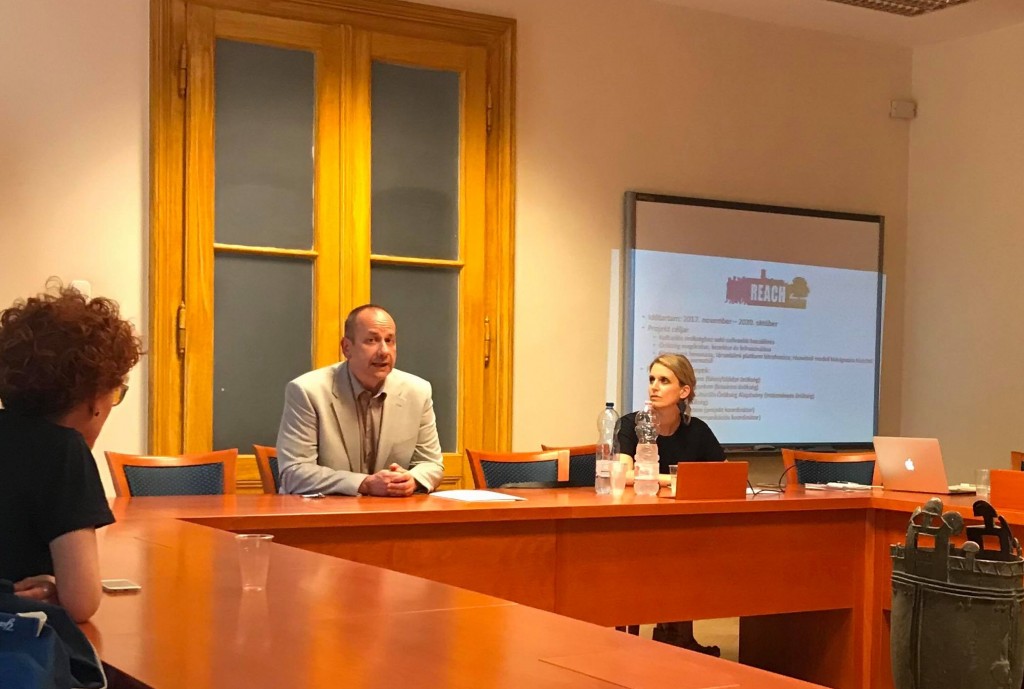 The 20th of June, ELTE University, task leader of REACH project minority heritage pilot, headed the first meeting aimed to launch the idea of a Roma local heritage collection – representing the first case study of the Minority heritage pilot – in the 8th district, Budapest. Among the 23 districts of Budapest, the 8th district has the largest Roma population. Therefore, it seems crucial to preserve and manage the local Roma heritage, by involving local Roma and non-Roma stakeholders, including civil organisations, public institutions and local administration. This first meeting aimed at introducing potential actors to each other and to outline the first objectives, related to the establishment of the local Roma heritage collection. As an inspiratory model, the first and so far only Roma Local History Collection in Hungary was invited from Újpest, 4th district of Budapest.
The Roma Local History Collection of Újpest was introduced by its founder and director, István Gábor Molnár. This collection, including a digital archive and an exhibition, located in the building of the Roma Minority Self-Government, Újpest, is based on a twenty-year-long research of local heritage. The complex research comprehended oral history, participatory observation method and archive research.
The discussion of the meeting was focussed on the adaptivity of the “Újpest-model” to the 8th district and the potential participatory process and practices of the pilot. Possible obstacles and difficulties were also highlighted, including ethical concern, the general weakness of civil society and the lack of local Roma organizations. In other terms, the difficulty of approaching the local community emerged as a key topic for the following meetings.
Nevertheless, the participants considered the idea of the local Roma heritage collection as a pertinent project and seemed engaged to participate in it.
The Topotéka project (including the Budapest Collection, Metropolitan Ervin Szabó Library and the Budapest City Archives) offered to create a digital platform for the local Roma collection, as well as an exhibition at the building of the Budapest Collection, Metropolitan Ervin Szabó Library.
János Csóka, president of Roma Minority Self-Government of Budapest, offered to facilitate further meetings with local self-government members in the 8th district.
Anna Czékmány emphasized the educational potentials of the project and the potential application of the Roma heritage project in museum educational practices of the Petofi Literary Museum.
Ágota Szilágyi-Kispista proposed to organize exhibitions in the Gallery 8 and to involve the curators and volunteers of the Gallery in the research phase of the project.
Next steps:
Participants agreed on the importance of the project objectives and are willing to meet again in the near future, hopefully with the participation of further local actors, such as:
– representatives of the Local Government of the 8th district
– representatives of the Roma Minority Self-Government of the 8th district
– teachers / director of the Lakatos Menyhért Primary School (local primary school with a very high percentage of Roma pupils)
– members of different Roma NGOs
This introductory meeting proved for the organizers that the idea of creating a Roma Local Heritage collection in the 8th district may attract cultural heritage experts and local stakeholders as well. The following steps should include the contact with further local actors and the establishment of an action plan, including the precision of what exactly the project should collect, from whom should it collect and the methods of collection. Furthermore, it should define the milestones of the project, as well as the structure of the team. Finally, potential outcomes should be proposed, such as exhibitions, digital archives, methodological workshops, conferences or local events.
For further details click here