How technology is reshaping learning and teaching?

Look at the impact digital technology is having in the classroom 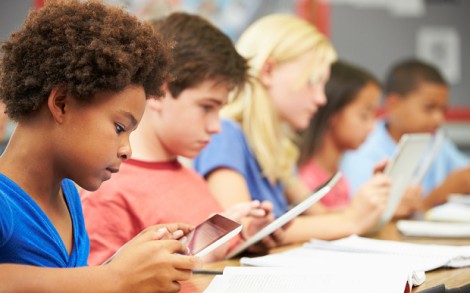 iPads in the classroom – Photo by John Lewis

Once there were notebooks, pens and colouring pencils; now books and pencils are joined – and often replaced – by laptops and tablets. Nowadays the children entering school are fully fledged digital natives.

According to Ofcom’s recent researches, six-year-olds have the same understanding of communications technology as 45-year-olds and 14- and 15-year-olds are the most tech-savvy in the UK; over four in 10 households now have a tablet, meaning that children are becoming computer-literate before (in many cases long before: we think about techno-babies, who are able to handle iPads and smartphones before they are able to speek) they’ve even started primary school.

Unsurprisingly, technology is playing an increasingly central role in the classroom.

Technology reporter at the Daily Telegraph Sophie Curtis, who recently took part in an interactive experiment run by Argos and Intel (which involved sitting through two English lessons: one held the old way, without any kind of technology, and the second with all the latest digital gadgets), writes:

the first involved reading a scene from Shakespeare’s Macbeth, listening to the teacher talk through the themes and then writing my own analysis with pen and paper. The second involved watching a series of video clips depicting differing interpretations of the balcony scene from Shakespeare’s Romeo and Juliet, using the internet to research the themes and then typing my own interpretation on a laptop.

While the first lesson required intense and sustained concentration, the second was undeniably more compelling. I’m not sure I learnt any more about Romeo and Juliet than I did about Macbeth, but at no point during the second lesson did I find my mind wandering, which is half the battle teachers fight every day.

John Lewis conducted a similar experiment, using iPads and an interactive smartboard to teach a maths lesson. A series of web-enabled apps were used to teach the class about the area and volume of shapes, allowing them to rotate digital 3D models on their screens and divide them into blocks.

As a pupil, I was also able to take part in quizzes and submit my answers digitally. The teacher was then able to pull up individual pupils’ answers on the smartboard and show

them to the rest of the class.

Anyone who has been through a more traditional education system may find these techniques gimmicky, but many teachers now claim that flashy multimedia lessons are the only way to engage children whose ability to absorb information has been shaped by continuous exposure to technology from a young age.

Using technology in an educational environment not only better reflects children’s life outside the classroom, but also allows them to hone their digital skills in a way that will continue to be valuable throughout their adult life.

“The use of mobile digital technologies in the classroom might be largely unfamiliar to parents, but the benefits can be huge,” said Drew Buddie, senior vice chair at Naace, the association for the UK’s education technology community.

“It’s not about just shifting traditional lessons onto screens; it’s about allowing pupils to make use of their devices to truly enhance their learning while giving teachers better ways to track individual achievement and personalise lessons.”