Angered Archaeologists allow thousands to enter the Louvre for free

On the 5th of February 2015 the lobby of the Louvre in Paris was took over by about 100 peeved archaeologists, blocking the ticket booths for nearly five hours and allowing visitors to enter the museum without paying admission.

The protesters were members of CGT-Sud-FSU-CNT, a coalition of unions representing cultural workers. They were all preventative archaeologists, who are brought in to investigate construction sites to ensure that any remaining artifacts are safely unearthed and cared for, and that no vestiges are destroyed. 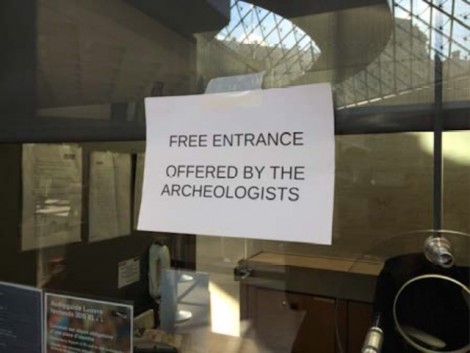 A sign on a Louvre ticket booth put up by protesting archaeologists (photo courtesy CGT-Sud-FSU-CNT, via cgt-culture.fr)

Public sector workers, since the passage of a law in 2003 they have been forced to compete for job sites with private enterprises, a situation they say has greatly affected the quality of the archaeological work being done. Initial diagnostics at construction sites must still be done by workers from the National Institute for Preventative Archaeological Research, but the actual digs can now be carried out by private companies.

“Their arrival has created an imbalance in research – Thomas Bouquin, a member of the union, told France TV Info – they don’t share their findings and have no obligation to serve the public.”

A statement posted on the website of the SGPA-CGT-Culture explained:

«This February 5, more than 100 archaeologists of the preventative archaeological public service occupied the Louvre museum and conducted a free admission operation for nearly five hours. The archaeologists chose this site because it is emblematic in the history of French preventative archaeology (the excavation of the Cour Napoléon, the Cour Carrée, and the Jardins du Carrousel from 1983 to 1990 that forged the development of this profession) to denounce the catastrophic situation into which their discipline has been plunged.»