The interactive performance was a success of assistance and experimentation 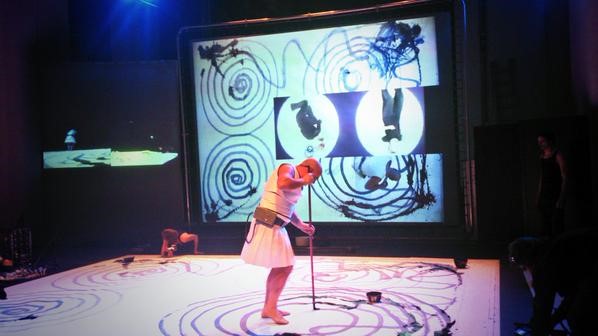 Last April 9, telecommunications engineers from the Audiovisual Unit at i2CAT Foundation (RICHES partner) and internationally renowed creatives within the performing arts such as Marcel·lí Antúnez and a group of actors and dancers from University of Falmouth, presented his latest creation, an interactive and distributed performance between two remote scenarios, the Centre Arts Santa Monica in Barcelona and a study in the campus of the University in the United Kingdom.
Under the name of ULTRAORBISM, the performance became a live demonstration of how advanced conference systems, streaming media, networked and distributed environments can support creativity in the fields of scenic arts, especially theatre, dance and performance. The performance, which reached great impact, was seen live by more than 150 spectators distributed in the two venues separated by miles away, and also offered the possibility to see it around the world through an online streaming service. The i2CAT Foundation, RICHES partner and technology provider of the show, experimented and test key aspects of relevant importance in distributed environments such as latency or real-time interaction between remote scenarios, synchronization and the use of advanced technologies.

Ultimately, ULTRAORBISM opens new doors for experimental and creative formats using advanced visual environments in the field of telematics and distributed events. The potential utilities of the results are very rich from a technical point of view and also from an artistic perspective, and the excellent results of this experience present a very optimistic future in the development of co-creation environments in Europe and the use of ICT in the fields of culture and the arts.

At the end of the show, a networked collective symposium was held between participants, artists and the audiences in both scenarios. The RICHES Project, which one of its main research goals is to investigate how the advent of digital technologies is changing the ways in which we understand, preserve and disseminate the European cultural heritage, was present throughout the show, analysing this real case scenario and collecting the opinions from the spectators using post and after event questionnaires, both in Barcelona and Falmouth. Furthermore, RICHES Project’s representatives from Coventry University, Project Coordinator, participated to a focus group after the event. Between 8 to 10 people took part in the discussion after the show, where reflections and opinions about the event were shared. The inputs collected will be analysed in order to measure the short-term and long-term impacts, on an individual level, of being in the audience in a distributed performance arts event. The study, which is currently being undertaken, was specifically designed to explore individual’s pre-performance anticipation and expectations as well as to collect spectator’s self-assessment in terms of their own experiences, reactions and satisfaction with the performance. The results of this study and a video showcasing the event and the collaborative co-creation process undertaken thanks to the ULTRAORBISM show will be presented at the RICHES Final International Conference which will be celebrated around March next year in Coventry.

This trans-national action was organized by the i2CAT Foundation (RICHES Partner) and the Direcció General de Creació i Empreses Culturals of the Government of Catalonia in the framework of a cooperation between the RICHES and SPECIFI European Projects.