The Design of Everyday Things by Donald Norman 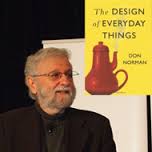 On the 27th of May 2014, at Cappella Farnese of Palazzo d’Accursio, in Bologna, Electrical Engineer and Cognitive Psychologist Donald Norman presented his book The Design of Everyday Things, extended version of the initial edition The Psychology of Everyday Things (Italian title La caffettiera del masochista – il design degli oggetti quotidiani).

The event was organised by the University of Bologna, Degree Course in Design and Industrial Product, and was part of an open-to-all meeting cycle devoted to investigating the meaning of the surrounding things, the future preview, the sense of the human-centred design. The meeting cycle programme was the following:

The meetings with the three international scholars were devoted to strengthening the technical and cultural competences of the young contemporary designers; the initiative was patronised by University of Bologna, Bologna Municipality, ADI (Association for Industrial Design), Urban Center Bologna (communication centre of Bologna city) and Italian publishing house Giunti Editore.