The first international conference of the RICHES project took place in Pisa on 4-5 December 2014, preceded by the plenary meeting of the consortium. The whole event was organised by Italian partner Promoter Srl in the aristocratic venue of Palazzo Lanfranchi, a patrician palace on the riverbanks of Arno river, that hosts the collection of the Museum of Graphics of the city. 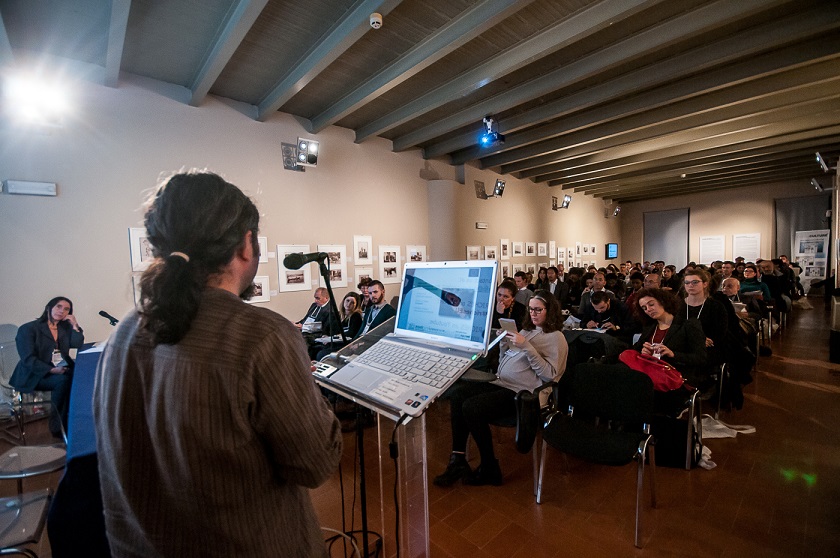 The conference opened in the afternoon of 4th December, when the attendees, after the registration and a nice welcome coffee, took seat in the large room of the second floor, fully dedicated to the conference. Welcome speeches of Antonella Fresa from Promoter, Dario Danti Chancellor of Culture in representation of Pisa municipality, Alessandro Tosi scientific director of the Museum of Graphics and Mauro Fazio from the Italian Ministry of Economic Development introduced the day. Then there were speeches by two associate partners of the RICHES project: Francesca Lanz from Politecnico di Milano presenting “MeLa Project: European Museums in an age of migrations” and José María MartÍn Civantos from Universidad de Granada,  presenting “MEMOLA Project: Mediterranean Mountainous Landscapes”. Finally, Neil Forbes from Coventry University spoke about the vision, the research areas and the outcomes of the RICHES project.

The evening concluded with two pleasant cultural activities: a guided tour to the exhibition of Tullio Pericoli, renowned Italian painter and illustrator, on show at the first floor of the Museum of Graphics, and a visit of the crowdsourced photographic exhibition of the All Our Yesterdays series, showing digitised images of vintage photographs collected among the citizens of Pisa during the Europeana Photography main exhibition All Our Yesterdays (1839-1939) Scene di vita in Europa attraverso gli occhi dei primi fotografi (11 April – 2 June 2014).

On the second day, the conference began with Neil Forbes who took again the microphone for the first keynote speech entitled “Assessing value in cultural heritage”. It is widely recognised European cultural heritage is an important component of collective and individual identity and that it contributes to the cohesion of Europe and to the creation of links between citizens. At the same time, a number of challenges and pressures threaten to undermine this immeasurably rich endowment. The over-riding need, it is said, is to promote cultural heritage’s intrinsic value. But what is meant by “value” in this context? The speech by prof. Forbes illustrated a few of the issues involved by drawing on selected examples of contested values around cultural heritage.

Second keynote speech, entitled “Digital art and digital cultural heritage in China”, was by Xiaochun Situ, trying either to describe how Chinese artists, Chinese art critics and Chinese media think about “digital” and to investigate the status of digitalisation of cultural heritage in China, with a focus on libraries, museums and galleries. This issue was discussed according to the introduction and implementation of the Chinese government’s directives, showing how the governmental organisations are working and providing some indications about what is on plan. 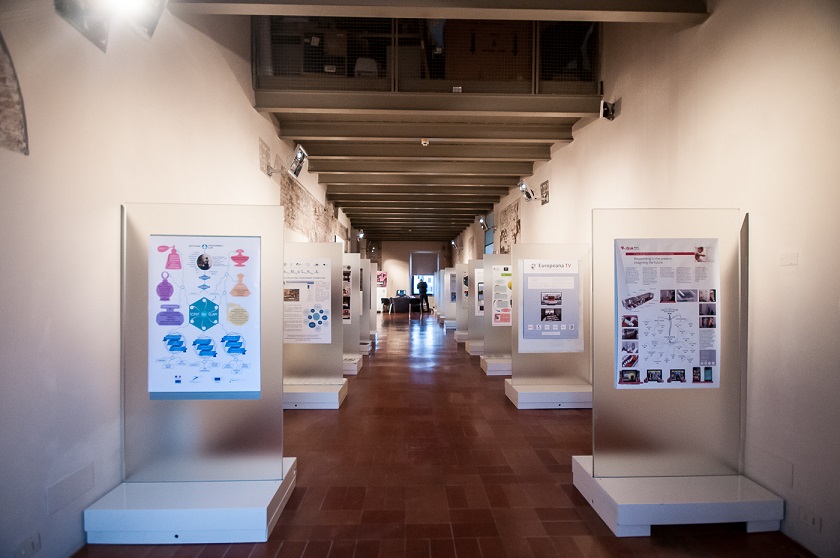 Unable to be present on site, the third keynote speaker of the conference, Bill Thompson from BBC , made a virtual greeting to the public via skype; then his speech was shown to the attendees trough a video presentation. Thompson’s intervention, entitled “Broadcast Archives as Cultural Heritage: can the BBC engage as well as it informs, educates and entertains?”, tryied to investigate how the big broadcaster BBC, as a store and source of cultural heritage, can actively engage its public; whether it is possible for BBC to permit unmediated access to the cultural assets it creates without mediation and control and what impact technological innovation will have on the BBC’s future role.

Last but now least, Karol Jan Borowiecki intervened in the conference as fourth keynote, with a lecture about “Personal relationships and the formation of cultural heritage: The case of music composers in history”. Using data on the lives of 522 prominent music composers born in the 18th and 19th centuries, Borowiecki showed how creative clusters formed in Paris, Vienna and London and how locating in a musical city greatly increased each composer’s productivity. Borowiecki’s research signifies the importance of personal relationships in the formation of cultural heritage. 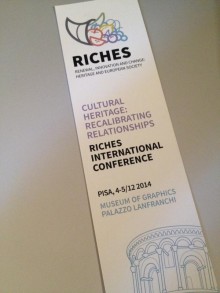 After the lunch and the visit to the poster session of the conference, the second part of the day begun, introduced and moderated by Dick Van Dijk. The afternon was devoted to presenting the co-creation sessions executed as part of the RICHES project in the Netherlands. A co-creation session can be defined as an experimental activity aimed at demonstrating how the public can be creator (and so co-creator, together with the heritage professionals) as well as user of cultural contents. In other words, it is a practical example  of “relationship recalibration”.

Central question underlying the Netherlands’ activities is how young people relate to heritage and heritage practices; the method to direct this conversation gets through design thinking and co-creation with young adults, museum staff and designers from Waag Society. The aim of the co-creation activities is to contribute to identify novel strategic directions for museums. The results of such activities can contribute to (re-)think what it means for a museum to relate to contemporary society, fostering recognition of identity and history and contemporary life of young adults with multicultural backgrounds.

The conference ended with final conclusions and remarks and the sense of having created a really interesting event: not only a milemarker for the Riches project, but also a wealth of consideration and input around the theme of reducing the distance between people and culture.

The overall topic of these two-days was indeed: recalibrating the relationship between heritage professionals and heritage users in order to maximise cultural creativity and ensure that the whole European community can benefit from the social and economic potential of Cultural Heritage.