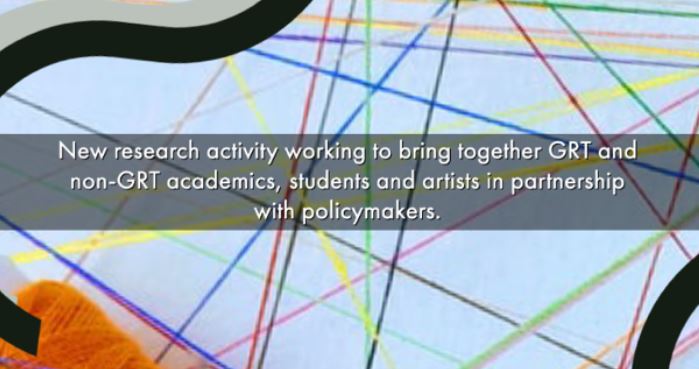 The project, carried out by Rosemary (Rosa) E Kostic Ciseros from Coventry University’s Centre for Dance Research included a symposium, 2 art exhibitions, 2 online campaigns, 3 films.
During the activities GRT and non-GRT academics and artists and policymakers worked in partnership for better understand local, regional or national challenges.
The cultural heritage artefacts from the GRT community members involved in the project raised a debate around how to make universities more culturally welcoming to marginalised communities.
Objectives:
• Extend existing related research activity and support HE institutions in addressing particular social issues facing different vulnerable communities at a local and national level;
• Facilitate the use of existing research and the exchange of knowledge between universities, artists and policymakers
• Carryout events and activities aimed at improving the dialogue between universities, artists and policymakers;
• Activity and training to better equip academics, including postgraduate researchers and early career researchers, to communicate effectively with policymakers;
• Partnerships and collaborations aimed at supporting evidence-based policy making;
• The exchange of people best practices;
• Curate an exhibition that reflects the data and display this in an artistic manner within the university environment.
The findings of the project feed directly into a follow up to the GRT in HE report drafted with Baroness Whitaker from Westminster in November 2019 and led by Professor Margaret Greenfields from Buckinghamshire New University (BUCKS).