Glasgow City Heritage Trust is an independent charity supported by Glasgow City Council and Historic Environment Scotland.
Established in 2007, it champions the city’s unique architecture and built environment to promote and encourage the understanding, appreciation and conservation of Glasgow’s historic buildings for the benefit of the city’s communities and its visitors.
In order to increase the awareness of the inhabitants to the theme of the enhancement of the urban architectural heritage and involve them in the preservation of historical buildings, the organization periodically promotes exhibitions and participatory events such as debates, workshops and conferences. 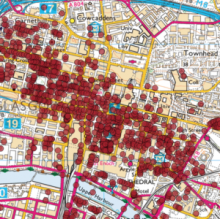 For September 27th, is planned the last meeting of the quarterly sequence of debates called “The City Talks”, during which, a selected panel of experts and the audience will discuss the criteria used for listing ancient buildings in Glasgow and if they “fully reflect what the city and its people value about the historic built environment.”
Main questions to face:
– What’s the point of Listing Buildings?
– Should we be trying to save historic buildings which are unlisted and outside of conservation areas?
– Who might they be valuable to?
Read more about the Glasgow City Heritage Trust and upcoming debate here