Designing dialogues for an ethnographic museum

Within the RICHES Project, Janine Prins observes design thinking methods, investigating their usefulness for anthropologists. A look behind the scenes of work-in-progress.

By Janine Prins, researcher in residence at Waag Society.

Some say that ‘design anthropology’ is on its way to becoming a separate subdiscipline. As a visual anthropologist I’m intrigued whether we can add creative tools to our existing audiovisual elicitation and communication techniques. How can design methodologies be applied to social situations?

CO-CREATION
In this particular case, medialab Waag Society is collaborating with the Dutch Museum of Ethnology. In a larger European research context they are examining how, in an increasingly digital enviroment, formal cultural heritage institutions can improve their relevance for an ever more diverse population. This is in line with my view that ethnographic museums could – and should – appeal more to contemporary young adults. The relationship needs to be recalibrated, or ‘re-designed’ if you like.

I brought four young research assistants to the team: Lotte and Hemmo – two of our MA graduates Visual Ehtnography– and Ilias and Hodan who I’d encountered through my preliminary research. Between the five of us we recruited some 15 to 20 young adults willing to spend three Saturdays at workshops with museum staff. We aimed for a mixed bag of people in terms of education, profession, demography, class, ethnicity, and gender in order to get as wide a variety of perspectives; this actually turned out to be pretty difficult. But we did get quite a fair variety of inputs, nonetheless. 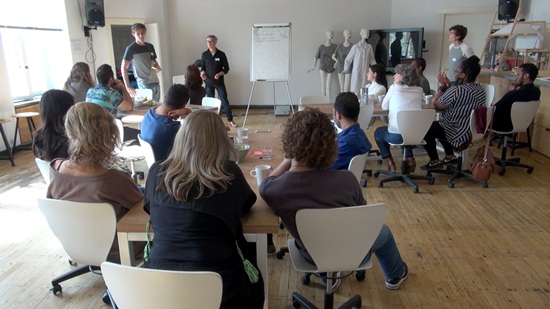 At sea
It was impossible to explain what we would be doing exactly, as the whole process was new to us too. However, we encountered enough curiosity, enthusiasm, and willingness to embark on this adventure of ‘co-creation’. Douwe-Sjoerd Boschman, who co-designed the workshops, visualized the process as follows (abridged version): 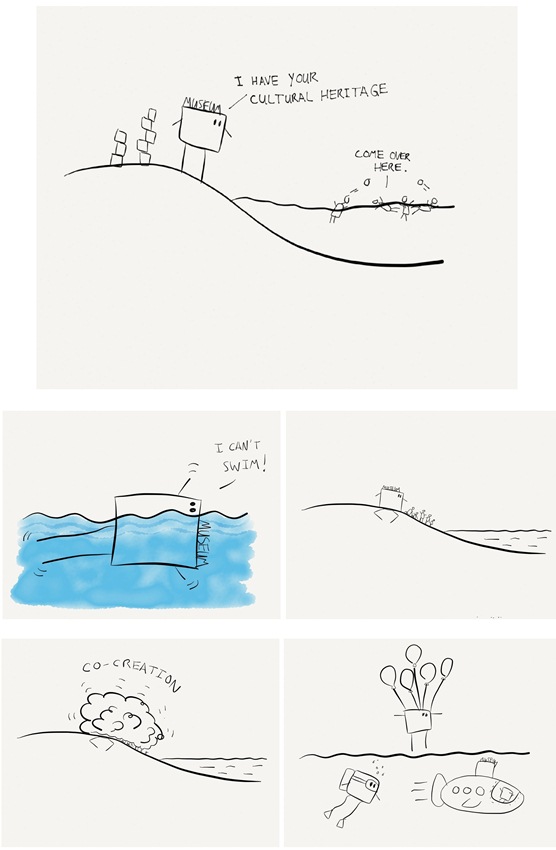 Does this make it any clearer? If not, check out the written method behind the apparent madness, for instance in the process guide of the Institute of Design at Stanford University.

Step one: ‘emphathize. This sounds familiar to anthropologists; so far, so good. But what does it entail in this case?

Thinking by doing – in principle
The initial idea for the series of workshops was to work from an intuitive and personal idea about ‘things’ worth keeping for the participants towards an analytical approach to the challenges that museums face. Various generative, often sensorial, tools and techniques are available for such processes that begin ‘beyond words’.

However, the museum partners and some research assistants preferred to stick to the spoken word rather than try the proposed ‘thinking through making’ route. As a result the personal approach was pretty much discarded, which corrupted the design process as a whole…but these things happen. For me it is a pity as I was particularly interested in the potential added value of this: we tend to tackle only the top two layers from a model like this.

As an anthropologist you go into the field to see what people really do, as opposed to what they say they do. And yes, we interact, but seldom intervene or elicit any further. Design thinkers want to delve deeper, hoping to access unconscious desires and future needs.

I can see it may seem fairly impossible to reach that level through words alone; you cannot talk about what you are still unaware of (unless you associate freely for years on a psychoanalyst’s couch).  However, design thinkers claim – if I understand it correctly – that various sensorial techniques do allow new ideas, thoughts, and feelings to emerge. Would this be akin to Tim Ingold’s ideas about ‘Thinking through making’? In this case I won’t be able to find out. For now, a different process needed to be designed by the Waag Society. So here is what we did end up doing.

A puzzling process
First we were led through a process of ‘Appreciative Inquiry’ that focuses on positive experiences, leading to shared values. We also went to the Fablab to play around a bit with ‘Talking Data’. 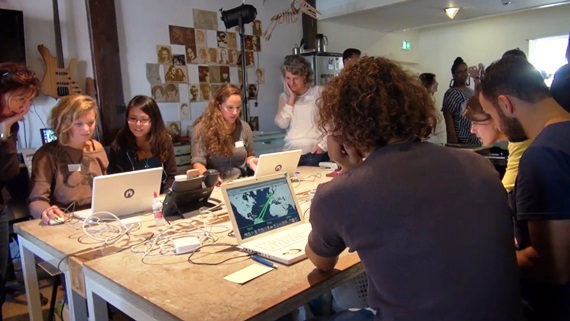 Through the Talking Data tool we got to know one another a little better on a personal level. I found out, for instance, that Lai Ming, who I supervised when she wrote her BA-thesis, has a diving certificate and aims to explore the Egyptian coast.

Next we needed a tool that would encourage dialogue, so StoryPuzzles were brought to the table – or floor rather. These puzzle pieces, with multi-interpretable icons, are designed to get people to set out a problem in a practical way and to take a non-linear approach to solving it. Regardless of problem solving: discussions do not linger in the air, they are materialized, so to speak, and all participants are equally involved.

The physical form of the icons is said to have more advantages – if participants are reluctant to express personal feelings, for instance, or are not inclined to verbalize much at all. This tool was originally developed by the Waag Society for a UNDP toolkit and was tested during citizens’ engagement programs in Egypt, Armenia, and Georgia.

Our discussions as we tackled these puzzles – full of fiery emotions – ultimately led to a list of about eight suggestions to investigate further. The next two workshop days took place in the museum itself. 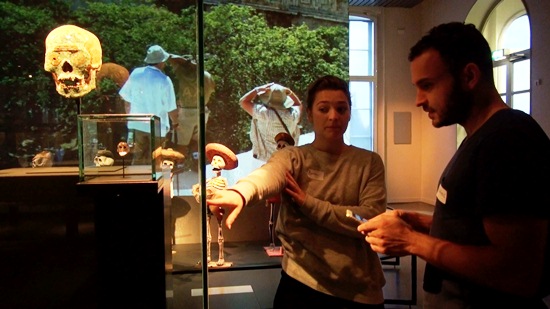 From chatter to matter
The exploration on location charted the gaps in more detail between curating intentions and young people’s perceptions. It did not stop there though; a working compromise had to be formulated and made specific.

As Dick van Dijk put it: ‘With young adults, museum staff, and designers all involved in this dialogue, we take the notion of co-creation literally and try to move beyond the use of mere words; actually designing some potential intervention strategies for the museum together ‘hands-on’. This was not an easy task for most. I witnessed a fair amount of procrastination, unease, and reluctance, but in the end – no doubt helped in part by time pressure – we came up with some serious results. 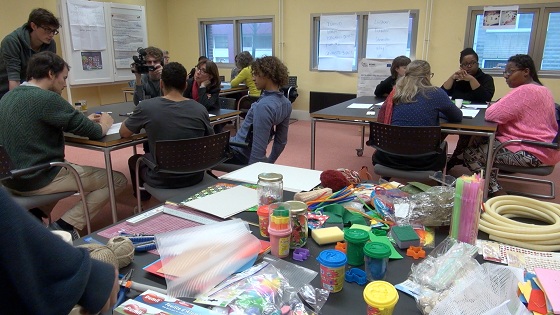 Gradually, over the course of three days working together, we had moved from empathy, via defining the problem, to formulating some ideas. In other words; we are currently halfway through the entire design process. I can hardly wait to witness how some of the ideas will be transformed into a pilot that will be executed and tested as part of the RICHES research programme. To be continued… 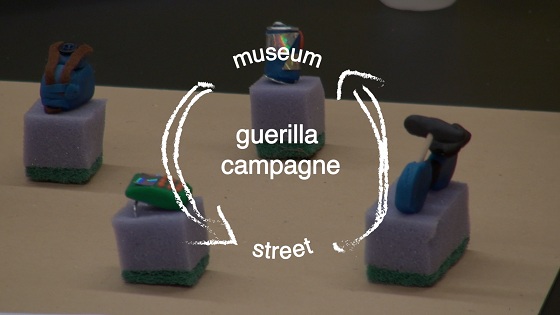 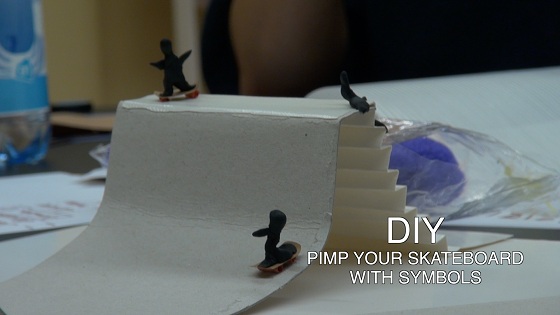 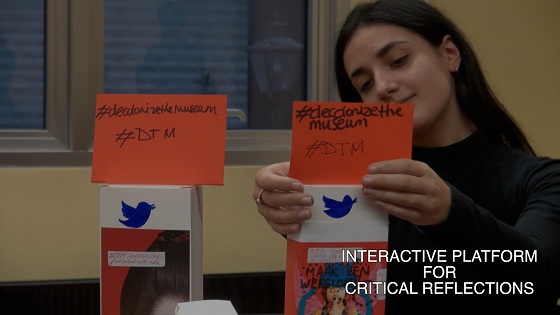 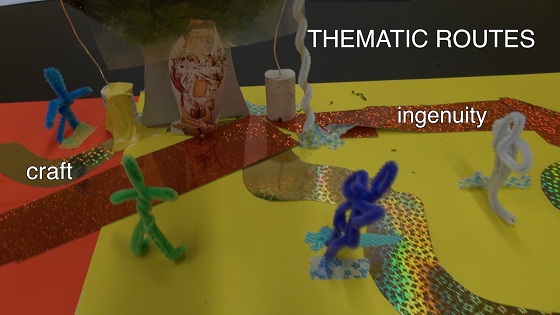