The project “Navig@nagni” was born in 2009 to let the world know the artistic trasures of the “City of Popes” through the web.

This has been by  scanning  the major historical and artistic sites with a laser scanner which, in addition to a perfect 3D modeling, has allowed a scan hundreds of equirectangular  pictures, using a special software developed by Massimo Iachetta, head of the ICT department  of the City of Anagni. You can admire and appreciate in detail the Anagni monumental treasure, with  360° view and in each direction.

The crypt of the cathedral,built and painted in 1300 and also known as “the Sistina Chapel of the Middle Ages”. 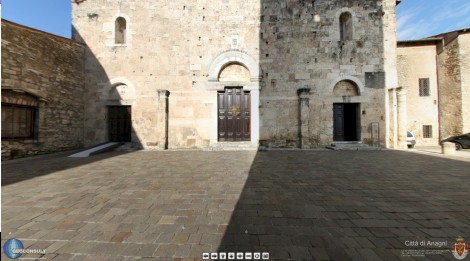 the Cathedral, dedicated to Saint Mary

The project Navig@nagni starts from one of the major art treasures, the crypt of the cathedral, built and painted in 1300 and also known as “the Sistina Chapel of the Middle Ages” for the beauty and uniqueness of the paintings on the walls and vaults, and then navigate inside the Cathedral, the museum site called “lapidarium”,  in the halls of the “museum of the slap”, dedicated to the historical events of Pope Bonifacio XIII, and finally in amazing halls of the headquarters building of the Municipality.

For further detail of the virtual tour, each site was taken up in various “points of view”, logically linked by the software,  to create a true “virtual path” where visitors have the real feel of the road ahead personally.

To see more details of the works of art, in the navigation software has been implemented an algorithm that allows you to make an “zoom in” with  automatic pixels regeneration,  through appropriate interpolation algorithm, thus avoiding the view of the classics “pixels into large squares.”
Direct link: http://www.comune.anagni.fr.gov.it/home/progetto-navignagni

the Palace of the Municipality

The web version, for obvious reasons of space and processing speed,  has been realised in medium resolution, but the entire project is available on DVD with all scans in 3D and all  different visuals in high definition.

The project is in the expansion phase, the first models are provided for scan of other important monuments and the use of a drone with hd camera is being studied for aerial set of the sites.