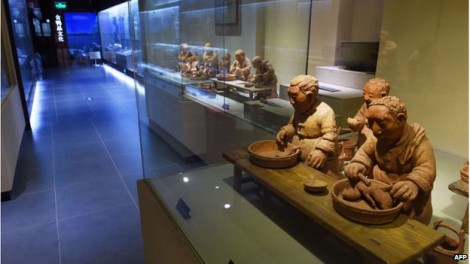 Clay models showing how to prepare the roast duck

When you think of museums in China you may have calligraphy, landscape paintings or even Ming vases in mind – Martin Patience of BBC writes – Not, I would suggest, a giant statue of a golden duck.

But one of Beijing’s latest cultural offerings is a museum dedicated to the capital’s most famous culinary dish: roast duck.

The museum, built by the well-known Quanjude restaurant chain, is most of all attended by peckish customers of the restaurant.

The exhibits include clay models showing how to prepare the roast duck, restaurant advertisements from a bygone age and various pictures of famous people – including, surprisingly, the actor Charlie Chaplin – eating Peking duck. 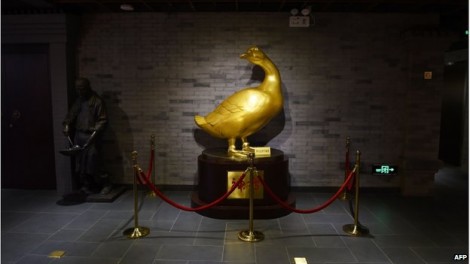 Giant golden duck at the museum

The museum is part of an astonishing building boom and is not the only one of its type: among the country, there are museums dedicated to watermelons, socks and so on.

The boom is going to continue because the funding is there and the interest is there – says Cathy Giangrande, a co-author of the Chinese Museums Association Guide – China is trying to reach the number of museums they have in the US per head of the population.

Less than 50 years ago, she observes, everything was being destroyed during the Cultural Revolution and anyone who was a private collector or had a private museum was banned. The museum building boom therefore represents a major change in the Chinese history.

Curator Cheng Guoqin says part of the reason the government supports the opening of new museums is that it improves the country’s image.

Even if the Chinese government still censors what the public can and cannot see (anything politically sensitive remains strictly off limits) but in terms of choice the average Chinese museum visitor has never had it so good.