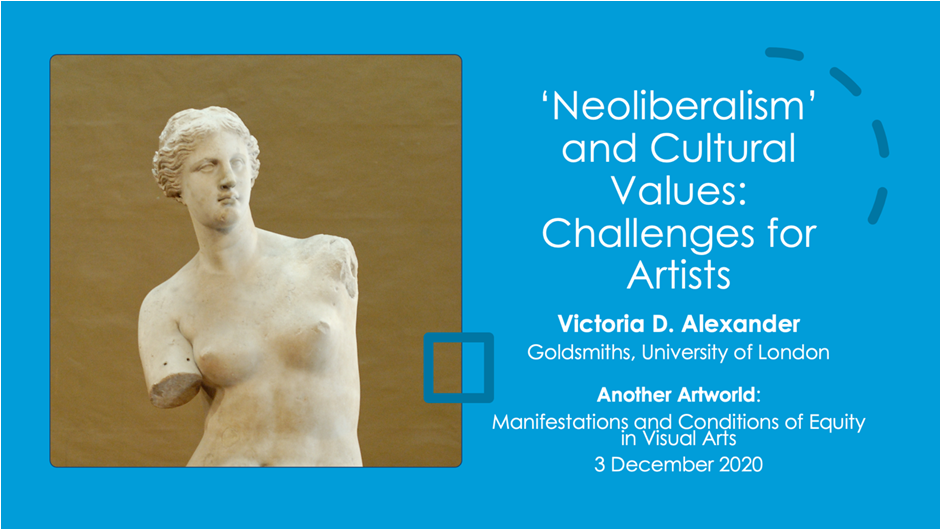 On 3rd December 2020, Professor Victoria Alexander , from Goldsmith, University of London, UNCHARTED project’s partner, gave a keynote address to the online conference “Another Artworld: Manifestations and Conditions of Equity in Visual Arts”.
The event was organized by the UNESCO Chair for Cultural Policy and Management of the University of the Arts in Belgrade in partnership with the Association of Fine Artists of Serbia. It received financial support by Ministry of Culture and Media of the Republic of Serbia, the Austrian Kulturforum (Austrian Embassy in Belgrade) and was supported by the European Network on Cultural Management and Policy ENCATC. The main goal of the conference was to establish a discussion on principles of democratic governance and decision-making models in the field of visual arts, with the desire to broaden knowledge and consider possibilities of its implementation.
The talk draws on Professor Alexander’s work on heteronomy in the arts field and was based on the research she carried out in cooperation with Oliver Peterson Gilbert from Goldsmith, Post-Doctoral Research Assistant for UNCHARTED, in the framework of the project WP1, devoted to understanding the societal value of culture.
The contribution focused on the way Neoliberalism has affected cultural values in the UK and in the European Union. Neoliberalism, defined as a market-oriented ideology, has been taken up especially in Anglo-Saxon contexts, but also in various ways and degrees across the whole of Europe. Many of these effects are negative, for instance, shifts to the measurement of the social value of art by extrinsic yardsticks (such as economic and social impacts), rather than valuing art intrinsically. Neoliberal discourse also accompanies the decline of state support for the arts that is also accompanied by more market-based control mechanisms, all of which affect equity in the visual arts. The talk explores the extent to which cultural values are negatively impacted in such ways. In addition, as a counterpoint, it also looks at how Neoliberalism influenced some positive cultural values, for instance, more inclusive exhibitions and performances, as well as opening spaces for resisting discourses and DIY actions. By gauging the extent of the penetration of neoliberal discourse into European cultural values, the talk identifies challenges for visual artists.
The entire contribution can be viewed on YouTube here.
To know more about the influence of neo-liberalism in the configuration of the values of culture, consult the UNCHARTED work Package 1 webpage and read the full text of the related deliverable  D1.4  here.
UNCHARTED website: uncharted-culture.eu