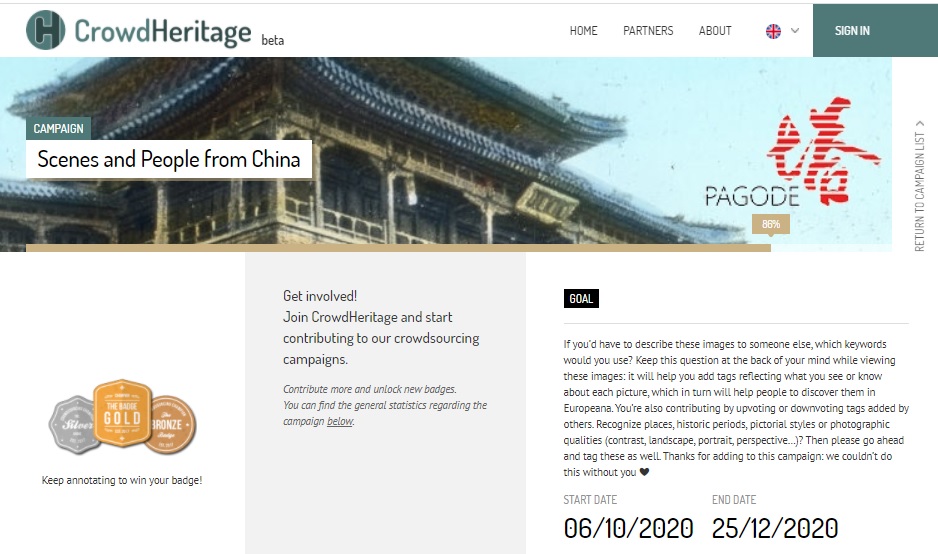 In addition to offering in Europeana a wealth of new cultural content, digitized at the highest level of quality, witnessing the links between Europe and Cina caross century, PAGODE has the objective to improve the information available on Europeana from other Chinese-related collections. To do this, the project recently launched a crowdsourcing campaign that allows researchers, students and culture lovers join the effort of annotating and curating photographic materials about Chinese culture that are currently published in Europeana.

By using a very intuitive crowdsourcing platform, anyone can look at selected heritage photographs from Europeana and add descriptive tags to identify places, historic periods, pictorial styles or photographic qualities (contrast, landscape, portrait, perspective…). The annotations will then be fed back by PAGODE to Europeana to improve the information available.

The PAGODE crowdsourcing campaign is entitled “Scenes and People from China”, currently comprising two volumes of images that offer a glimpse of life in China throughout the 20th century as well as portraits featuring people with Chinese roots or ancestors.