European week of Regions and Cities: The New European Bauhaus and its Relevance for its Citizens – Shaping a More Beautiful Future in Europe 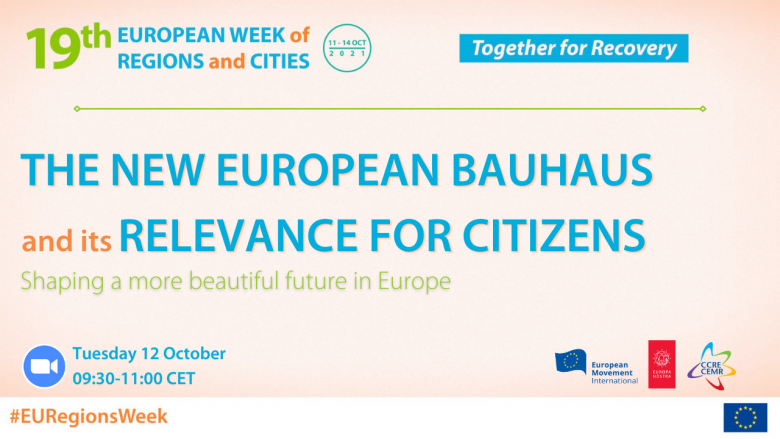 On Tuesday 12 October 2021, from 9:30-11:00 CET, stay tuned! The European Movement International, in partnership with the Council of European Municipalities and Regions (CEMR) and Europa Nostra, will hold a digital panel discussion entitled “The New European Bauhaus and its Relevance for its Citizens – Shaping a More Beautiful Future in Europe”. The debate will be run in the framework of the EU Regions Week 2021, the annual four-day event during which cities and regions showcase their capacity to create growth and jobs, implement European Union cohesion policy, and prove the importance of the local and regional level for good European governance. This workshop will bring together the voices of Europe’s local and regional governments, of Europe’s shared cultural heritage and Europe’s young generation to demonstrate the mobilising and transformative power of the New European Bauhaus for the future of Europe. This creative and interdisciplinary co-creation movement aims at bringing the European Green Deal closer to citizens and their living environments. Together with the ongoing Conference on the Future of Europe, it offers citizens a unique opportunity to shape a future that is sustainable, beautiful and inclusive, both in urban and rural areas.
Featuring:
Flo Clucas, Spokeperson – Local Finances; Councillor of Cheltenham, Council of European Municipalities and Regions (CEMR).
Sneška Quaedvlieg–Mihailović, Secretary General, Europa Nostra.
Monika Skadborg, Board Member, European Youth Forum.
Marcos Ros Sempere, Member of the European Parliament, Founder of the European Parliament’s New European Bauhaus Friendship Group.
Moderator: Petros Fassoulas, Secretary General, European Movement International.
Registration for the event is available here.
More information…