WEAVE project is organizing a series of LabDays to engage communities with their tangible and intangible heritage.

In this LabDay organized by partner ERIAC, a discussion is launched to promote a more permanent exhibition of Roma art and heritage in the context of the prestigous Venice Contemporary Art Biennale.

The event takes place in Venice and will be streamed online on ERIAC’s website. 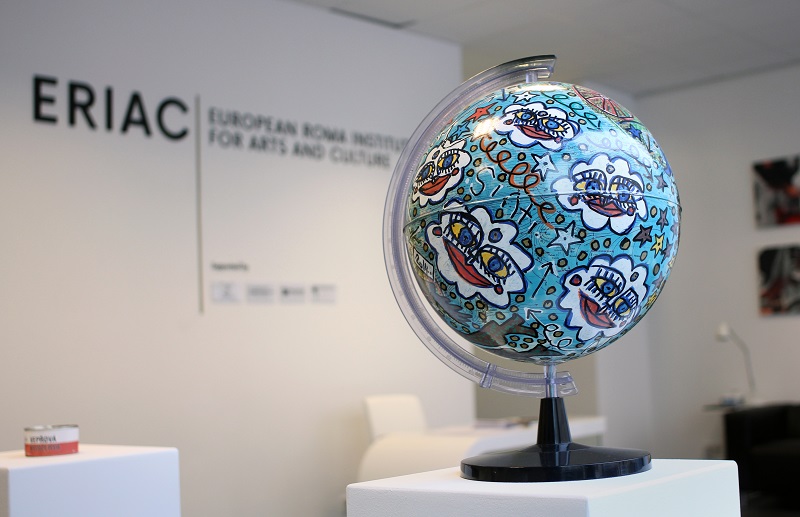 In the past there have been various exhibitions of Roma culture at Venice Biennale, in 2007, 2011 and 2019, which represent the greatest efforts ever made by Roma to present Roma art in an international stage in the center of contemporary cultural diplomacy.

2007: The First Roma Exhibition was established in 2007 in the frame of the 52nd Venice Contemporary Art Biennale. The exhibition, entitled Paradise Lost, curated by Tímea Junghaus, included the work of 16 Roma artists from eight European countries. It was a stance and claim in the existing frame of European Roma representation, and it proposed a transnational, contemporary and up-to-date vision for thinking about the Roma experience. It had over 200,000 visitors. The location was Palazzo Pisani S. Marina (piano nobile), Venezia, Cannaregio 6103, Calle delle Erbe, Opening period: 10 June to 21 November 2007.

In 2011, at the 54th Venice Contemporary Art Biennale, Maria Hlavajova curated the exhibition Call the Witness (based on Suzana Milevska’s original idea), with a flux of live “testimonies”— works of art, performances, talks, and conversations by and with artists, thinkers, and politicians. It engaged many distinguished non-Roma artists, writers, and curators, including Salman Rushdie and Arnout Mik. The location was Palazzo Zorzi, UNESCO Venice Office, Castello 4930, Venice, Opening period: 1 June to 9 October 2011.

In the lack of collecting, archiving and museum institutions to house artefacts once these Roma exhibitions are dismantled, their histories become vulnerable and their achievements carry on only as interpersonal – and later transgenerational knowledge, which slowly – with the means of digital remembrance – constitute a new form of intangible cultural heritage. The Roma exhibitions are not connected to the prestigious locations, and known spaces of the Venice Biennale, but to the non-spaces of digital-discussions, oral histories, letter and in-person exchange, archival documents and digital exhibitions.

The “Exhibition” of the largest European minority is considered a “collaborative event”, and not a national pavilion. Roma do not have a national pavilion/building/space, while being the largest national minority to many of the exhibiting national representations. As a consequence, the precarious Roma minority’s presence at the Biennale is possible only if Roma pay the entrance fee as a collaborative event (30,500 Euros) to the Biennale Office, in addition to spending to rent the exhibition space in Venice. In these circumstances, the chance for permanent, tangible representation of Roma in the most prestigious European art event is unimaginable.

The Labday discussion mitigates the need for a permanent Roma Pavilion as the place to motivate the development of innovative projects and experimental cross-disciplinary work of Roma. In the context of the Venice Biennale, the Roma Pavilion has the potential to become the safe space won by the Roma struggle, a place of intuition, new ideas, discourses, and trends in European contemporary art.

Daniel Baker (1961, United Kingdom) is a Romani Gypsy artist, researcher, and curator. Originally from Kent, and currently based in London, his work is exhibited internationally and can be found in collections across the globe. Baker earned a PhD in 2011 from the Royal College of Art, with his dissertation, “Gypsy Visuality: Gell’s Art Nexus and its Potential for Artists”, after previously earning an MA in Sociology/Gender and Ethnic Studies from Greenwich University, and a BA (Hons) in Fine Art from Ravensbourne College of Art and Design. Baker has contributed to numerous exhibitions, held various residencies, and curated several commissions. He previously worked as an exhibitor and consultant for the first and second Roma events at the International Art Exhibition of La Biennale di Venezia – “Paradise Lost” and “Call the Witness”, which took place during the 52nd and 54th International Art Exhibitions of La Biennale di Venezia, respectively. For more information about Baker and his revolutionary work, visit www.danielbaker.net

Timea Junghaus is an art historian and contemporary art curator. She started in the position of Executive Director of the European Roma Institute for Arts and Culture in September 2017. Previously, Junghaus was Research Fellow of the Working Group for Critical Theories at the Institute for Art History at the Hungarian Academy of Sciences (2010-2017). She has researched and published extensively on the conjunctions of modern and contemporary art with critical theory, with particular reference to issues of cultural difference, colonialism, and minority representation. She is completing her Ph.D. studies in Cultural Theory at the Eötvös Lóránd University, Budapest. In recognition of her curatorial activities, Junghaus received the Kairos – European Cultural Price from the Alfred Toepfer Stiftung F.V.S., in 2008. Her curatorial works include the Roma component of the Hidden Holocaust- exhibition in the Budapest Kunsthalle (2004), Paradise Lost – the First Roma Pavilion at the 52nd Venice Contemporary Art Biennale (2007), the Archive and Scholarly Conference on Roma Hiphop (2010), The Romani Elders and the Public Intervention for the Unfinished Memorial to the Sinti and Roma Murdered Under the National Socialist Regime in the frame of the 7th Berlin Biennale (2012), the (Re-)Conceptualizing Roma Resistance – exhibition and education program in Hellerau, Dresden (2015) and the Goethe Institute, Prague (2016). She is the curator of the Visual Arts Section for RomArchive – Digital Archive of the Roma, funded by Kulturstiftung des Bundes (2015-2018). Junghaus was the founding director of Gallery8 – Roma Contemporary Art Space (www.gallery8.org) in Budapest (2013-2017), the winner of the 2014 Catalyst Contemporary Art Award (of Tranzit Hungary) and the 2014 Otto Pankok Prize awarded by the For Roma Foundation of German writer and Literary Nobel Laureate, Günter Grass.

Emese Molnár is a sociologist by training with a professional interest and formation on the crossroads of intersecting fields from the more theoretical such as gender and equal opportunities studies, towards the more performative like art and activism. Between the years 2016-2018 she has been a fellow of the Hungarian-Argentinean exchange program of the Argentine Ministry of Education, doing a Master’s degree in Curatorial Studies in Visual Arts at the National University of Tres de Febrero (UNTREF) in Buenos Aires, Argentina. As a production assistant she participated in the organization, production and montage of the exhibition “Take Me, I´m Yours” curated by Hans Ulrich Obrist and Christian Boltanski in the framework of BIENALSUR, the International Biennial of Contemporary Art of South America organized by UNTREF in 2017 in Buenos Aires, Argentina. Part of her freelance curating endeavors includes a virtual photography exposition held at the KORUNK Gallery in Cluj Napoca, Romania in February 2021 (NY City Visions – Pre-COVID Places and Non-Places). She has been curator in residence at the Museumsquartier Vienna in April 2019, with the support of Tranzit Austria and Erste Stiftung, and beforehand she has contributed to the collective exhibition “100 Years of Parallel Dialouge”, reflecting on the transformative changes of the past decades that affected the different ethnic groups living together in the CEE region (Art Museum of Cluj, Romania in august 2018). Emese comes from the field of social inclusion and empowerment, having worked 4 years at the Open Society Foundations in Budapest, Hungary. Within the Roma Initiatives program her greatest contribution was the organization of professional meetings and conferences around the theme of anti-gypsyism that paved the way to the founding of the European Roma Institute for Arts and Culture (ERIAC). She participated in several socio-cultural development projects implemented by ITD / CEPS Projectes Sociales in Barcelona, Spain working on issues of migration, social participation, European capitals of culture and storytelling. In 2011 she was part of the organizing committee of the International Theatre Festival “Interferences” held at the Hungarian Theater in Cluj, Romania. She joined ERIAC in August 2021 as Project Coordinator for the Roma Pavilion at the 59th Venice Art Biennale to be held between April and November 2022 and is also involved in RomaMOMA, which is a contemporary art project initiating a forum for collaborative reflection on a future Roma Museum of Contemporary Art.

Luisella Pavan Woolfe was born in Trieste, Italy and graduated in Political Science magna cum laude from the University of Padua. Here she subsequently became assistant professor of Anglo-American law. As an official of the European Commission for over thirty years, she developed new policies and legislation in the areas of environment protection, equality between women and men and people with disabilities. She also managed funds which support vocational training, employment and education in the European Union. She was the first Director for Equal Opportunities to be nominated by the European Commission. As such she was responsible for the European Union’s policy developments in the area of gender equality and fight against all forms of discrimination. In 2007 she was appointed Representative to the Council of Europe. Subsequently as staff of the European External Action Service, she opened the European Union Delegation to the Council of Europe. She worked in Strasbourg as the first resident EU Ambassador to the Council of Europe and head of delegation from 2010 to 2014. Her mandate covered human rights and democratic governance in wider Europe. In September 2014 she became Principal Advisor Global Issues in the European External Action Service, with special responsibility for food security. From July 2015 she is the director of the Council of Europe office in Venice. She is the author of several articles on European matters. She has written a book on the interrelations between employment policy and social issues in Europe. She was awarded the 1998 European prize by the Bellisario Foundation for Women Entrepreneurs.