this acknowledgement is the result of two years of consultation with the territory's stakeholders, the third round of labelling is underway with clearly increased ambitions, both from the point of view of the themes covered and that of the territory considered.

Christophe Béchu, Minister for Ecological Transition and Territorial Cohesion, has renewed the Grand Site de France label for Bibracte – Morvan des Sommets by ministerial decision dated 5 August 2022.  The result of two years of consultation with the territory’s stakeholders, the third round of labelling is underway with clearly increased ambitions, both from the point of view of the themes covered and that of the territory considered.

A historical site with a strong symbolic value – as the site of the ancient city of Bibracte, capital of the Aeduan Gallic people in the 1st century BC – and an archaeological centre of reference on a European scale, Mont Beuvray also benefits from an exceptional landscape. It has therefore been classified as a site since 1990. In 2007, Bibracte – Mont Beuvray was awarded the Grand Site de France label, which was renewed in 2014. This selective and demanding label is awarded for a renewable period of 6 years by the ministry in charge of landscape policy to the manager of a remarkable site, protected by its classification under the law of 2 May 1930. It recognises its great heritage value, the quality of its maintenance and the interest of the preservation, management and development project.

The Grand Site de France label: a distinction for the sustainable management of the most beautiful landscapes in France

“The “Grand Site de France” label may be awarded by the minister responsible for sites to a listed site of great renown and high visitor numbers. The awarding of the label is subject to the implementation of a project for the preservation, management and development of the site, in accordance with the principles of sustainable development. The perimeter of the territory concerned by the label may include municipalities other than those that include the classified site, as long as they participate in the project. This label is awarded, at its request, to a local authority, a public establishment, a mixed syndicate or a management body including the local authorities concerned. (article L341-15-1 of the Environment Code). The Grand Site de France label does not entail any specific regulatory constraints. It recognises a collective approach to preserving landscape quality based on the goodwill and commitment of the parties involved. Since its introduction in 2001, this demanding label has been awarded to only 21 Grands Sites. Their managers are federated by the Réseau des Grands Sites de France, an association that also includes some thirty territories working to obtain the label.

The Burgundy-Franche-Comté region has two labelled sites (Bibracte – Morvan des Sommets and Solutré – Pouilly – Vergisson), as well as four others on the way to being labelled: the Ballon d’Alsace, the Vallée du Hérisson – Plateau des Sept Lacs, Vézelay, and the Vignobles et Reculées du Jura.

As part of the preparation for the renewal of the label, a landscape diagnosis combined with close consultation with local elected representatives led to the proposal of a project territory extended to twelve rural communes of the Morvan Regional Nature Park forming a coherent geographical grouping that encloses the three main peaks of the Morvan: Haut-Folin (901 m), Le Préneley (855 m) and Beuvray (821 m).  These communes are divided between the Nièvre department (Arleuf, Fâchin, Glux-en-Glenne, Larochemillay, Millay, Poil, Villapourçon) and the Saône-et-Loire department (La Comelle, La Grande-Verrière, Roussillon-en-Morvan, Saint-Léger-sous-Beuvray, Saint-Prix). They concern three communities of communes: Bazois-Loire-Morvan, Grand Autunois-Morvan and Morvan des Sommets et Grands Lacs. Their territory covers approximately 42,000 ha for a population of 3,800 inhabitants.
Within this territory, the classified site of Mont-Préneley and the Sources de l’Yonne, owned by the Nièvre Department, is of particular importance because of its high heritage value, which complements that of Mont Beuvray. This change of scale has led to the adoption of a new name for the Grand Site de France: Bibracte – Morvan des Sommets, which replaces Bibracte – Mont-Beuvray.

A territorial laboratory for ecological and solidarity-based transition within the Morvan Regional Nature Park
Following on from the ambitions expressed during the previous labelling cycles, the Bibracte – Morvan des Sommets Grand Site de France has been given the role of an experimental territory within the Morvan Regional Nature Park. In addition to constituting the “landscape setting” of two listed sites, this territory, which corresponds to the most mountainous part of the Morvan massif, expresses all its heritage value in the form of a remarkable but threatened landscape. The Grand Site de France approach is a particularly suitable tool for its preservation.

Voluntary consideration of agricultural and forestry issues
Three priority issues have been identified, all of which have an impact on the quality of the landscape

To meet these challenges, five lines of action have been selected:
– Axis 1: carry out exemplary management of the listed sites at the heart of the project area
– Axis 2: work alongside the players in the world of agriculture and forestry with a view to preserving the landscape quality of the area
– Axis 3: work alongside the municipalities and service providers to preserve the area’s heritage resources and make the Grand Site de France an attractive and welcoming area
– Axis 4: develop a territorial project that leaves no inhabitant behind
– Axis 5: continuously evaluate performance in order to adjust actions and share experience 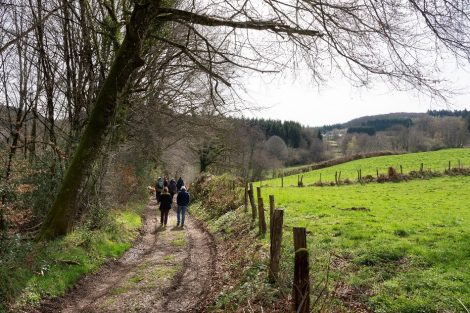 The extension of the project’s territory and the increase in the ambitions of the approach require the mobilisation of an increased number of actors. The proposed project governance scheme is designed to ensure that consultation and decisions are widely shared with a wide range of stakeholders. This plan includes several bodies in addition to the executive committee that guarantees the approach, which brings together BIBRACTE EPCC, the lead partner, the Morvan Regional Nature Park and the Nièvre Department. A small inter-institutional operational team is dedicated to leading the process. An assembly of communes ensures the relay with the inhabitants. A strategic committee brings together correspondents from the various organisations concerned (State services, major local authorities, professional organisations, etc.). A committee of wise men brings together independent experts. Finally, a plenary assembly has the task of validating the major stages of the process.

The Bibracte – Morvan des Sommets Grand Site de France currently benefits from specific support from the Burgundy-Franche-Comté Region, the Regional Directorate for the Environment, Planning and Housing (DREAL) and the Regional Directorate for Cultural Affairs (DRAC). In addition, there is substantial support from the European Union through various channels: the European Agricultural Fund for Rural Development (EAFRD) under the LEADER Morvan programme and the European Partnership for Innovation in Agriculture and Forestry (PEI AGRI); the Horizon 2020 programme for research and innovation within the framework of BIBRACTE’s participation in the INCULTUM European research-action project.