A great emphasis is being placed by all the Pilots in promoting innovation in the products and processes proposed, or in techniques and approaches. 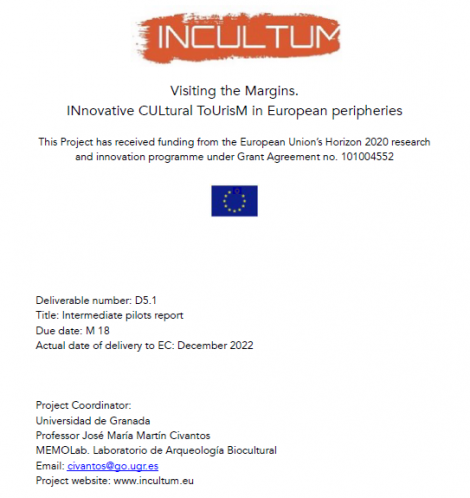 It is now available in the project’s website the recently released D5.1 Intermediate Pilots report, a condesed document which summarizes the work done by each of the 10 Pilot cases in the INCULTUM project.

Albeit with (sometimes big) differences and specifities, all the Pilots are aiming at developing new sustainable and collaborative strategies for local promotion of various areas, which also generate an effort in training and supporting actions to local stakeholders and a variety of innovations in rural and marginal terriotries in Europe.

The full deliverable can be consulted from this page along with all the other public deliverables produced in the project.

It is worth to highlight the emphasis being placed on the need to promote innovation in the products and processes proposed, or in techniques and approaches. In this sense, transversality with the innovation manager is being promoted. There is no shortage of challenges considering the nature of the pilots and the work being done with local actors and communities, based on participatory approaches that are not always simple and agile, but which we believe have greater potential in the medium and long term and will also have a deterrent effect on the negative impacts of tourism and touristification.

We can summarize the fields of innovation explored by INCULTUM in the following items:
1. The constitution of a heritage resource as a common (good) is a unanimously shared concern, but unequally explained by the pilots, even though it is obviously what provides legitimacy to the projects and grounds the actions.
2. The involvement of the community in the management of the heritage resource is a priority action over all others. The Granada team has developed a fine example of farmer involvement, which may be shared in greater depth within the consortium.
3. Most of the pilot projects have in common the objective of creating new visitor itineraries that make it possible to discover the resources of a territory along a route (most of the time using soft means of transport). These routes also involve local participation in their design and, of course, in their development. Thus encouraging local domestic tourism and knowledge of the local heritage. The systematisation of this approach through soft mobility can be considered as an element of innovation to achieve sustainable tourism.
4. The design of attractive narratives of the itineraries is essential (+in the light of the tourism revolution), the use and management of the water (pilot #1 Granada, pilot #2 Portugal, pilot #4 Sicilia), touristic resources based on a ethno-linguistic minority (pilot #7 Albania and in the next period also will be implemented in #pilot 6 Greece), or the dark tourism in pilot #9 can be detected as innovator touristic solutions.
5. In relation to the previous point, the mobilisation of artists to strengthen the attachment of communities to their heritage and to share it with others is a subject whose relevance is shown by the Bibracte achievements (see also the Apennine pilot #5).
6. The participatory heritage inventory and the participatory design of itineraries also seem to be vectors considered relevant by all the partners. It would therefore be useful to better share tools/methods to facilitate this mode of participation: importance of field surveys, availability of digital tools for collecting and sharing information.
8. Knowledge of visitors, their visiting practices and the impact (social, environmental, economic) of the involvement of the community in the management of the heritage resource as well as the sharing of this information with the community to produce ‘territorial touristic intelligence‘, is a subject that also interests several partners (pilot #6 Bibracte, the pilot #9 Irish, pilot #10 the Swedes), with concrete proposals from each pilot that should be made consistent / assembled.
9. Some pilots are modelling an integrated tourism economy approach (pilot #6 Greece, pilot #6 Bibracte, pilot #1 Granada) by mobilising the concept of territorial entrepreneurship that embrace the different sectors of activity of the territory involved in the management of the heritage common or by using business intelligence tools (pilot #6 Greece).
10. Promotional and visit tools are also a subject of interest to several partners (pilot #3 Slovaks and the pilot #9 Irish) and it would undoubtedly be useful for them to share their current work on this theme in more detail.

Additionally, all the pilots are doing their own communication on a local scale in the vernacular language, thus trying to have a greater implantation in the territory and the communities and stakeholders with whom they work and a greater dissemination on that scale, who are to a large extent INCULTUM closest and, a priori, most numerous target audience.