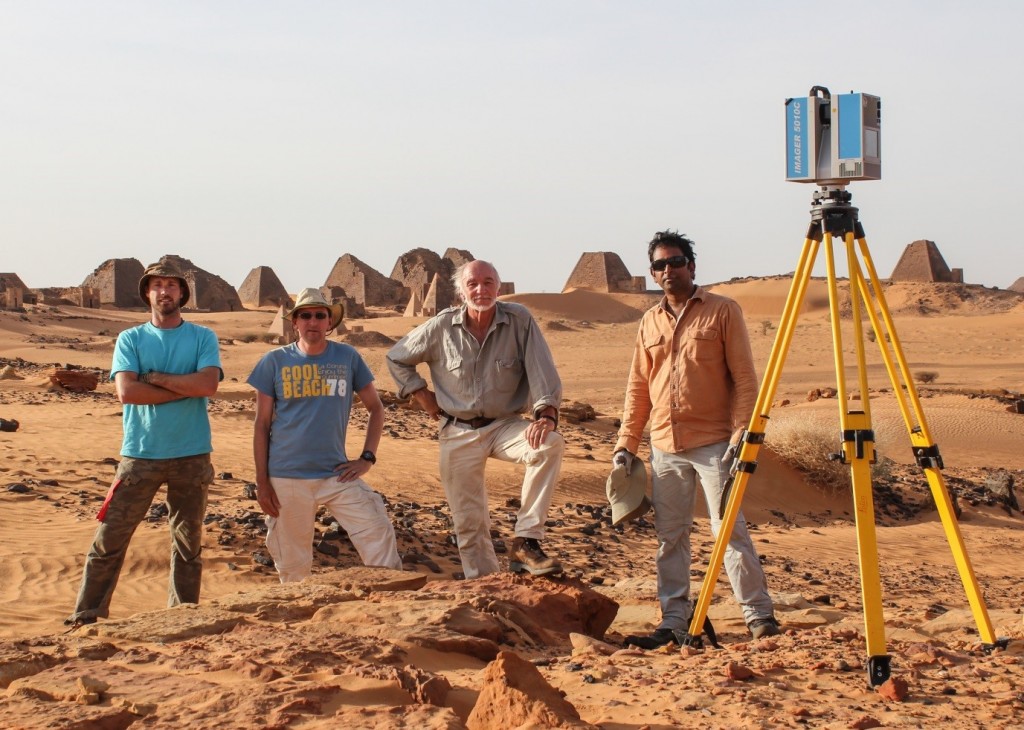 Since 2004 the Zamani project, based in the Geomatics Division at the University of Cape Town, has been documenting African historical sites (over 40 areas rich in buildings, rock art works and cultural landscapes) with the aim of creating accurate digital records for future generations and of increasing the awareness of Africa’s architectural and cultural heritage. Led by Prof. Heinz Rüther, the project has been producing results of interest for the education, research, restoration and archaeological site management sector.

In March 2015 the Zamani partners went back to Sudan, where they had previously been to document the temple complex of Musawwarat es-Sufra. Objective of the new mission was to digitally record the Pyramids of Meroe (Begarawiyah), recognised as UNESCO World Heritage.

«The Meroe site contains three pyramid fields – Prof. Heinz Rüther tells.
«North and South fields are the burial grounds of members of royal families from the Meroitic period of the Kingdom of Kush. The West cemetery field was reserved for non-royal burials.
The burial chambers, long since robbed of their content, are not located inside the pyramids, as it is the case with their famed Egyptian peers, but below the chapels in front of these. The pyramids were constructed between 300 BC and 300 AD as single or multiple layered stone shells, filled with gravel and rocks.

Pyramids in the North and South area, partly ruined and partly reconstructed (only in very few case almost completely) were built around 5 km east of the Nile, 200 km north-east of Khartoum. Treasure hunting and vandalisms, in addition to natural processes of erosion by windborne sand, daily temperature changes and other natural phenomena, caused severe damage to the pyramids. Especially changes in wind patterns and climate over the past 50 years are reported to have accelerated the degradation of the structures significantly. A conservation intervention, funded by the Qatar-Sudan archaeological project and implemented by the German Archaeological Institute, is currently underway for the pyramids’ preservation».

«Zamani cooperated with the Qatar-Sudan project and the German Archaeological Institute – Heinz Rüther goes on – attending to the digital 3D reproduction of the pyramids and creating a GIS model of the Meroe site, for a full spatial record of the area. Data were acquired through laser scanning photography, panorama photography and GPS surveys; acquired data were employed for the creation of textured 3D computer models, ortho-images of facades, photographic 360-degree full-dome panoramas, panorama tours and a site GIS.
The team acquired laser scanned 23 pyramids in the northern and 10 pyramids in the southern field. More than 6000 photographs were captured for texturing the final 3D models and creating panorama tours and a Virtual World.
It was the beginning of summer and the 47 degrees in the shade made the fieldwork demanding. The pyramids’ scan was a challenge, as most of their sides are jagged, which made it impossible to scan parts of the vertical and horizontal step surfaces from the ground level. Where possible the laser scanner was placed on top of a neighbouring pyramid to capture these occluded zones.
Now, the data processing is well advanced. The pyramids’ ortho-images produced will be used to establish a database of individual stones with information on their position, dimensions, conditions and intervention needs».