To celebrate the London 2012 Olympics, as part of the Watermans International Festival of Digital Art in London there will be a series of six installations from artists located all over the world.

The festival will focus on how digital art can become interactive, giving spectators the opportunity to ‘be part of the art’. Each piece of interactive, digital art will also attempt to ‘represent’ a different continent in the process. 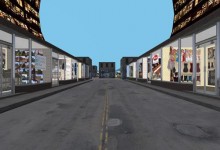 Joseph Farbrook will be showing Strata-caster, an exploration of the topography of power, prestige, and position. The art installation exists in the virtual world of Second Life, a place populated by over 50,000 people at any given moment. Although virtual and infinite, it continues to mirror the physical world, complete with representations of prestige and exclusivity. Entry into this installation is by wheelchair, an unfamiliar interface to the limitless expanse of virtual space, but one that continuously calls attention to limitation and position.

The exhibitions will be accompanied by a programme of seminars organised in collaboration with Goldsmiths, University of London. These seminars are open to the public.

Further information on each of the six instalments is available on the Watermans’ website.

Representing the UK, Gail Pearce with Going with the Flow