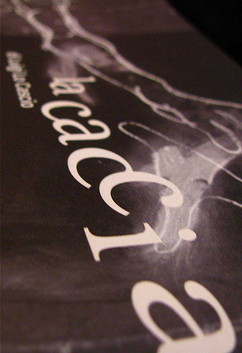 Luigi Lo Cascio, winner of David di Donatello prize as Best Actor in his first movie I Cento Passi, and then actor in further successful parts, comes back to his original love for theatre: after acting in Ronconi’s Il Silenzio dei Comunisti – which gave him another prize as best actor – directs and acts in another theatre drama La Caccia.

La Caccia is inspired by Euripides’ “The Bacchantes”, and it seeks the interior experience of the tyrant Penteus: in the beginning Penteus wants to opposite to the new Dionysian cult because it is breaking through traditional and martial principles of order and discipline; but in the end he also is entrapped by its powerful charm, so he dresses himself as a woman to see the Bacchantes meetings.

Penteus at the beginning is apparently resolute to chase away the Stranger, who is  bearing effeminacy, obscene excess and dangerous drunkenness; but soon his severity becomes an excess itself and he is turned into a pure tyrant – looking quite familiar to any modern example of despotism and intolerance: “Obligations, coercions, prohibitions and privations are the sharpened tools which will impress the edifying mark of austerity into that Stranger’s flesh and his wicked fellows’ […] His body will be wrenched by 4 horses at least, the pieces burned, the ashes blown in the wind”.

Penteus is not able to get Dionysus, but being determined to hunt him, he becomes a prey himself once he leaves his armour and goes out of the city, in the woods at dark night, where his mind loses any reference point.

There is somebody else who’s hunting Dionysus: the theatrical reviewer who’s trying to get his essence, without being able to catch and hold such unseizable article. At this point it is good to remind that, according to the ancient Greeks, Theater was the art of Dionysus.
The show comes  from mixing classical theater with animation, video art and electronic sound; and it is structured as a multi-media monologue: the pictures and drawings which appears on a digital screen  wish to represent the inner thoughts of Penteus’mind, showing his hallucinations and ravings and dizziness.
Moreover, during the breaks among the 3 acts of the tragedy, there is a monitor showing some provocative advertising: Lo Cascio, using his condition of  very well-known actor, promotes some beauty and wellness products, to create a funny and pitiless opposition between the classical theater Chorus – commenting the scene as the voice of the community, and the modern impersonal spot – breaking off the show only to promote a consumer’s good for our poor illusion of satisfaction.

In the end we can find 2 tragedies in the show: the ancient but never solved one between male and female principles, between order and chaos; and the modern impossibility to represent the tragedy itself, to share it with a community: in facts the multi-media monologue which aims to display the inner monologue of our hero can only show as an infinite echo the solitude and mental entrapment he’s falling into.