Before the MP3 by Hacking the Macchina Ridotta 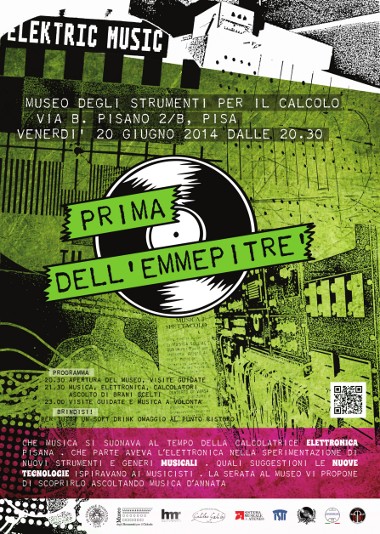 On 20 June 2014, at Pisa’s Museum of Computational Tools, a theme musical evening was held starting from 20.30. The event, entitled Before the MP3, was organised in the framework of HMR (Hacking the Macchina Ridotta, “macchina ridotta” meaning “smaller machine” in Italian. Macchina Ridotta was the very first computer designed and built in Italy: it made its dèbut in Pisa in 1957. The Macchina Ridotta was the first result of the same project that, in 1961, delivered the more famous CEP, standing for Calcolatrice Elettronica Pisana, that is Electronic Computer of Pisa).

HMR proposed an evening at the Museum of Computational Tools devoted to a period interesting to the Italian computer science as well as to the music production. Sound and music are data: they can be recorded, preserved and duplicated. From 1877’s phonograph to Today’s digital formats, technologies have influenced music listening contributing to make it a widespread phenomenon.

From mid-1950s to 1970s Pisa has seen the conception of the CEP project at the University, the development of the Macchina Ridotta – first Italian calculator – the start-up of Olivetti, the completion of the second CEP, the 7090 IBM, the CNUCE – first Computer Institutes of CNR – and finally the degree course in Information Science, again a national record.

The selected songs, taken from the Gap Record Store collection and played with the vintage equipment of Navistor Club, made us relive the soundtrack of that extraordinary period: electronics, protagonist of the calculator world, moved its first steps as musical instrument too and Pisa led, at CNUCE, with Master Grossi.

HMR is a research project on the recovery of the history and the technology of old computers, with a special focus on Italian ones. HMR has both historical and technological goals: on the one hand, HMR aims at reconstructing the facts surrounding the development of the early machines; on the other hand, HMR plans to rebuild past computers through simulations and replicas. HMR is a project of the Department of Computer Science of the University of Pisa, ongoing since the beginning of 2006. 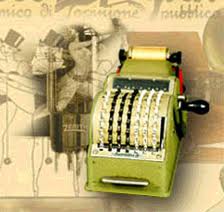 The Museum of Computational Tools is a unique institution in the city of Pisa, which distinguish itself also at a national level: for the richness of the collections and because among the most prestigious pieces it keeps unique samples, emblematic of the history of computing.

The Museum, situated close to Miracles Square, offers to the visitor a complete outlook of the history of computing’s main landmarks: the collections range from scientific equipment (such as compasses, metronomes, scopes, clocks…) to calculators and computers, such as Electronic Computer of Pisa – indissolubly tied to the name of Enrico Fermi – flagship of the Museum’s collection.

The Museum also holds an archival collection, open to the scholars wishing to consult it.