The digital at the Biennial

Venice's Biennial achieved the expectations of the digital technologies' fans

Venice’s Biennial of Art just concluded and surely it didn’t disappoint the digital technologies fans nor their expressive potentials. 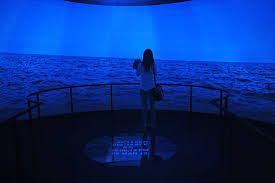 In the great variety of the Biennial’s artistic choices and expressive forms, the digital assumed different functions and importance degrees, ranging from artworks where there’s no space for the digital – one for all Lara Almacergui’s installation, which occupies all Spain’s pavilion with amazing ruins and rubble’s heaps – to artworks clearly focusing on digital: Studio Azzurro’s work on the Creation for the Holy See, Mohammed Kazem’s interactive installation “Walking on Water” for the Arab Emirates, Miao Xiaochun’s 3D works for China, just to give some significant examples.

In between of these two extremes there are a lot of artworks where digital sneaks in almost on the sly or it is present as simple part of a wider project. As example of this middle way, we can consider Podnieks’ work in Latvia’s pavilion: a delicate presence of videos, matched and at first glance confusing with static black and white photographs. There is then the universe of video-narrations, extremely varied in forms and contents. We range from the excellent video-documentaries of the IILA (Italo-latin-american Institute)-Latin America pavilion to elaborate fiction forms, such as the video-triptyque realized by Tsivopoulos for Greece’s pavilion.

Walking on Water presents Direction 2005/2013, an immersive installation conceived in 2005 and realized for this exhibition. Including a 360-degree projection of the sea and illuminated interchangeable GPS coordinates within an enclosed chamber, the artwork engages viewers in a seascape that invites them to experience what it is to be lost at sea, to walk the waters unafraid, to cross physical barriers and to roam the borders of ideas freely, thereby questioning and challenging  their perceptions of openness and universality.

Kazem most emblematic series, Directions, is a conceptual project the artist began in 1999. The water and the sea stand at the centre of this project, which was inspired by an experience Kazem did during a fishing trip. On that occasion, he fell, unnoticed, from the boat and was lost at sea for over half an hour before being located. Subsequent to this experience, Kazem became inspired to experiment with Geographical Positioning System (GPS) coordinates, that fishermen use to remember the location of the nets they cast. GPS coordinates became a defining aspect of the  Directions series and an iconic trademark for Kazem , who sees GPS as a tool for documenting his whereabouts, symbolically referring to his real existence and underscoring the ability to traverse both literal and figurative places without inhibition.

Ali Kazma’s multi-channel video installation explores the interventions and strategies that both release the body from its own restrictions in order to control it. As an extensive survey on the contemporary discourses, techniques and management tactics developed for the human body, Resistance is an attempt to unravel the interventions imposed and practiced on the body today. In this comprehensive project, awarded at Venice’s Biennale, Ali Kazma explores the ways the body  is shaped today through scientific, cultural and social tool, and how it is repeatedly reproduced as a performance site.

The Holy See this year for the first time participated to Venice’s Biennal with a Pavilion inspired by the biblical narratives of the Book of Genesis. In Principio (In the Beginning) is the title chosen by the commissioner, Card. Gianfranco Ravasi, President of the Pontifical Council for Culture. From the Holy See proceeded to identifying three nuclei:  Creation, Uncreation, Recreation. The first one was committed to Studio Azzurro.

“The subject of the frontal vertical tableau is men. The genealogies of imprisoned men, forced into a restricted space and time, welcome the visitors who interact with the storytellers. By recalling their memories, prisoners attempt an ideal but impossible reconnection with long biblical genealogies.

The subject of the left vertical tableau is environment. Names drop without words. Even those of plants and natural environments. And a man finds these names in “his hands” as small ecosystems to preserve and, at times, reconstruct. “Names in hands” become gift from hearing-impaired people who have verbal language limitations , but can transform these names into gesture shaping the space between the visitor and the questioned storytellers. It is a sentient space where embryonic forms of a new creation appear.

The subject of the right vertical tableau is animals. Animals’ names , which are also left without words, drop. A man finds them as a gift from hearing-impaired people who are limited  with language but able to transform “the world” into gestures shaping the sentient space between the visitor and the storyteller. In this tableau the narrators tell what animals and environments they would like to save for an imagined future world.

The subject of the central horizontal tableau is et sic in infinitum. The big box of the cosmos unfolds to the sound of a breath and following the beat it defines a space, in a rhythm that expands and initiates the time. (…) .

Et sic in infinitum: this square tableau, like a blackboard without memory, becomes a repository and a shroud collecting  the gestures generated by the relations that already occurred in other tableaux of the installation. It is a space that generates new forms…”

Kan Xuan’s brief videos focus on repetitive actions, deadpan visual litanies of objects and thematically serialized vignettes, which are presented to poignant, poetic and sometimes humorous effect. For the massive project Millet Mounds, Kan Xuan broadened her purview even further, to encompass vast expanses of Chinese history. Taking its title from the nickname given to burial mounds by Northern Chinese villagers because of their resemblance to harvest-time grain piles, this work include 171 videos documenting every known imperial tomb in China using a jerky, dreamlike stop-motion technique that involves stitching together hundreds of individual still photographs. The result is both a compendium of an ancient past China has rapidly distanced itself from in the onrush of its development and a travelogue of  Kan Xuan’s possibly trivial attempt to recover it.

The China pavilion at the 55th international art exhibition in Venice explores the theme of ‘transfiguration’, with particular focus on bridging the gap between life and art, the transformation of life to art, of the commonplace to artworks or art performance, of non-art to art. Seven Chinese artists explore this notion of change through different mediums and subjects extending from heavenly perspectives.
Through his digital art practice, Miao Xiaochun  is committed to re-creating our visual knowledge, overlapping depictions of familiar sacred images from art history (Noah’s ark, the Last Judgement, the Pietà etc.) with intercultural elements and references to develop his transfigured art world, dealing with our conception of religious works in the context of contemporary existence.

He presented an installation of different 3D works such as Disillusion and Out of notion – public enemy.

A projection on the Chinese Pavilion wall, whose elements are virtual, cyberspace and imagination, drives the visitor in a trip of harmony and freedom.

Other Xiaochun’s works are represented in a cube so that the visitor can see the same scenes from different points of view.