The Boy with a 3-D printed prosthesis

an amazing example about how technologies and internet are revolutionizing our lives.

Leon McCarthy, from Marblehead Massachusetts, was born without fingers in one of his hands. Certainly the family could live with it, although a prosthetic hand could certainly help and was recommended by the doctors. But the prosthetic options that are available for such needs have a cost around 30.000 dollars: it is pretty expensive because there aren’t many kids with upper-extremity amputations, and for this reason costs are high and productivity is very low.

But Leon’s father, Paul, is an artful man, and he began looking for a solution to help his son. 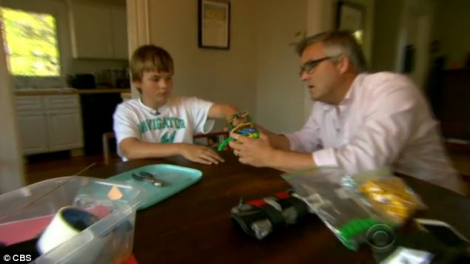 While surfing across the web he found a video with instructions on how to use a 3-D printer to make a prosthetic hand. So, thanks to a friend who borrowed his 3-D printer, Paul and Leon started experimenting and developing their own prosthesis.

Leon’s new hand gives him the ability to do things that were unthinkable for him before: holding a bag, picking up a water bottle and a pencil.

This story is absolutely revolutionary: first because the cost of the home-made prosthesis is around 10 dollars (!), and secondly because the prosthesis can be adjusted and adequated as long as Leon grows. Moreover, if the fingers of the prosthetic hand are broken, they can be easily replaced with new ones at zero cost.

The story of the Robohand video is itself pretty interesting and full of potential. In facts it derives from the collaboration of Ivan Owen – a special effects artist and puppeteer in Bellingham, Washington, who was working on a big puppet hand with metal digits that are able to bend thanks to thin steel cables that act like tendons – and Richard Van As, a carpeter living in Johannesburg who lost his fingers due to an injury happened at work. The two met, again by chance and again thanks to the internet, and together started to think and imagine how to create a mechanical hand.

Experimentations were carried on by Richard and Ivan with the 5-year-old Liam Dippenaar, who was born without fingers in one hand as well. At first they developed a “primitive” device for Liam, a hand with five aluminum fingers that opened and closed according to the movement of Liam’s wrist.

After that, and with the support of MakerBot company that provided them with a 3-D printer, they developed this project they called Robohand and shared video-instructions on how to build hand prostheses, low cost and affordable for almost anyone.

So far, in addition to his work as a carpenter, Van As has fitted more than 100 children in South Africa with Robohands. He doesn’t charge anything but his intention is to train others to learn how to assemble the devices and properly fit kids with them.