The Arab past, current and future situation about e-infrastructures 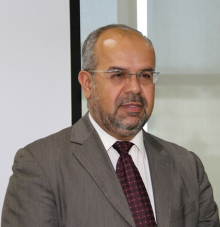 Yousef Torman is currently working as Managing Director for the Arab States Research and Education Network (ASREN). His responsibilities in ASREN include Technology, Networking and Infrastructure.

Yousef’s main focus is to promote and encourage the use of technology and networks in research and education.

We had the possibility to interview him about e-infrastructures, ASREN’s activities, plans and challenges, and digital cultural heritage.

Mr. Torman, what is the current situation of e-Infrastructures in the Arab region?

If you look five years back to the Arab region, you will find out that there were very few National Research and Education Networks (NRENs) in place. These NRENs vary among each other regarding the level of the network in terms of capacity and the number of organizations connected, they also vary in terms diversity of services provided to their users. Some of these NRENs were connected the global research and education networks.

Back to your question about the current situation of e-Infrastructures in the Arab region, there are now many initiatives and activities around the Arab region related to the developments of R&E e-Infrastructures. For instance, there are now 9 Arab countries having NRENs in place and 9 countries started the process of establishing NRENs and the other 4 countries will follow very soon. Many of the NRENs provide large set of services starting from connectivity to advanced services like federation of identities and more.

Except the EUMEDCONECT Program, there was no regional network for this region. The Arab States Research and Education Network – ASREN is taking the responsibility of establishing the regional Pan Arab Network (PAN). We are now discussing and exploring cooperation with GEANT, Internet2, APAN, CLARA, UBUNTUNET, WACREN and all regional R&E networks.

ASREN is a key player for the Arab region: what is it about and what are its major activities?

(1)    To build, maintain and consolidate regional e-Infrastructures dedicated to e-Science and education across the Arab Countries. Working on this objective, ASREN launched its first PoP in London Telicity to start providing services to the Arab NRENs and connecting them to the Global R&E networks. Other PoPs will follow.

(2)    To contribute to create and sustain NRENs in the Arab Countries. ASREN is working hard towards developing NRENs in many Arab countries including Bahrain, Lebanon, Iraq and Libya. ASREN is also approaching other countries that do not have NRENs to start.

(3)    To facilitate the collaboration and cooperation among the researchers and academicians in the Arab region. In this regard, ASREN is providing many services to the NRENs including capacity building and technical support. ASREN started supporting the NRENs to develop their national science gateway, federation of identities infrastructures and eduroam.

ASREN is also very active in promoting the e-Infrastructures in the Arab Region through its annual conference on Integrating Arab e-Infrastructure in a Global Environment (e-AGE) and conducting national and technical workshops in addition to providing necessary materials and newsletters.

ASREN is open to collaboration with other countries, also beyond the Arab region. How did the EC supported ASREN?

The EC support started since 2005 through the EUMEDCONENCT program which included the development of a regional e-Infrastructure in the Arab Med region as one of its main objectives. Other projects like EUMEDGRID, LinkSCEEM, EPIKH and CHAIN were also instrumental in the developments of ASREN and also the Arab NRENs.

In addition to the support ASREN is receiving from Talal Abu Ghazaleh Organization, there are two major supporting projetcs which are the EUMEDONNECT3 and CHAIN-REDS Projects.

What are ASREN plans for the next future,  and what are the challenges it is facing?

(2)    To further support the development of NRENs in the Arab region and to provide technical support and capacity building services as well as help in getting political and funding support.

(3)    To work on providing advanced services to the R&E communities in the region. ASREN is currently working on establishing the Arab Science Gateway and also on implementing the eduroam services and then to be part of the global edugain network.

Financial support and political support are among the main challenges facing the developments of NRENs at the national level and ASREN at the regional level. Lack of applications and services and contents are limiting the interest of researchers and educators to use the e-Infrastructures. Regulating the telecom market is another obstacle which also faces the development of dedicated networks to R&E. ASREN, together with NRENs should work hard on promoting the use of ICT and advanced e-Infrastructures and joint research projects towards a better research and education.

Finally, how do you believe e-infrastructures can influence the future of Cultural Heritage, given that cultural institutions are more and more involved in digitization programmes?

It is recognized worldwide that the Cultural Heritage activities, initiatives and projects are among the best R&E communities that show good level of usage of the e-Infrastructures in the region. Therefore, we, at ASREN, believe and will support the local and regional Cultural Heritage projects and initiatives towards a global cultural heritage network.