Structure from Motion and Image-based Modeling.

Extracting a 3D dots cloud from an object pictures-set. Then importing this cloud in a whatever graphics program to elaborate the 3D model of the object. That’s what you can do by simply using the Structure from Motion and the Image-based Modeling. They are two open-source techniques, alternative to the much more expensive (and problematic) laser scanner.

What do you need for using them? A simple digital camera and a laptop computer. 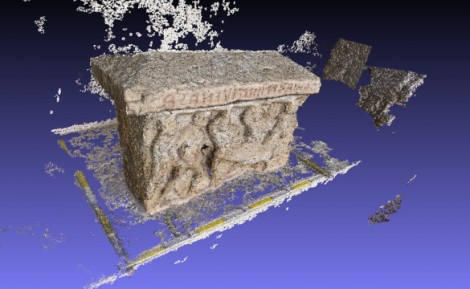 Structure from Motion (SfM), studied in the fields of computer vision and visual perception, refers to the process of estimating three-dimensional structures from two-dimensional image sequences wich may be coupled with local motion signals. In computer graphics and computer vision, image-based modeling (IBM) methods rely on a set of 2-dimensional images of a scene, to generate  a

3-dimensional model. In our case, given a number of images of a specific archaeological subject, taken from specific camera setting and orientations, we can build a synthetic image as taken from a virtual camera placed in a different point and with given settings.

The process is clearly explained by Sofia Menconero of Open Tèchne: she created the 3D model of the Thania Vipinei Etruscan urn by using her reflex digital camera. To elaborate the images, she used the Python Photogrammetry Toolbox (PPT), a completely open-source computer interface developed by the Arc-team, and CloudCompare (CC), a dots-clouds and mesh processing software apt to define the resulting image. 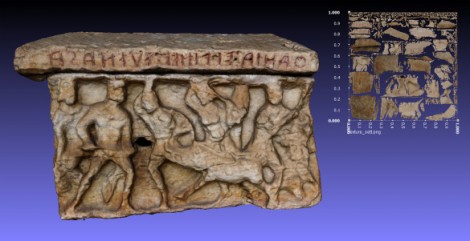 During the “LOW-COST 3D” event, held in Trento and organized by the “Trento’s Bruno Kessler Foundation” and the Pisa’s CNR “Visual Computing Laboratory”, the researchers showed how the SfM and IBM techniques are useful to operate in extreme archaeological locations (such as, for example, underwater sites), that the lightness of some photographic devices enables to utilize these on remote-controlled drones and that it’s possible, by using old pictures, to reconstruct vanished or seriously damaged archaeological settings.