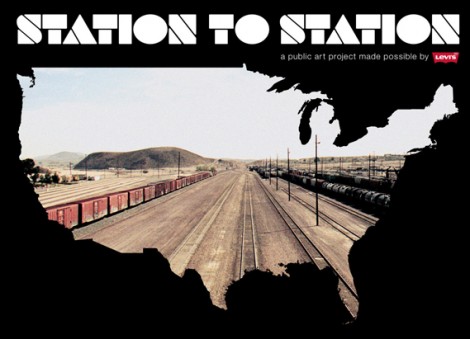 A new art project, ‘Station to Station’, started on the 6th September, created by Doug Aitken’s and Levi’s. This non-profit art project will be travelling through the USA on its own train, stopping at cities such as New York, L.A, and Oakland (there are 10 in all), and offering one night only of creative arts including music, dance and art installations. 28 artists and musicians are involved in the travelling arts project, including big-name musicians like Beck. The money raised by the 25 dollar ticket price will be used to help fund innovative arts projects at centres of art and culture such as the Chicago Museum of Contemporary Art and the Sundance Institute. The majority of the art houses ‘Station to Station’ raises money for are contemporary art museums, all of which are located in the U.S.

As well as featuring a wide range of different performances from dance to short films, ‘Station to Station’ ensures that each individual event also involves more than one artist or creative. This makes this project not only pioneering in its kind as a ‘travelling’ arts project, but also innovative in its idea to combine mediums in art productions. The digital quality and expertise of the Levi’s media campaign underlines the attention to detail, design and beauty ‘Station to Station’ maintains in its events, and it is perhaps thanks to Levi’s collaboration that the project has been able to gain so much recognition and publicity. 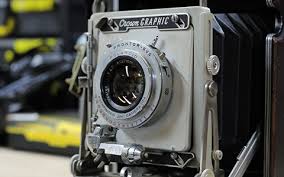 The video campaign includes the redesign of traditional arts and creative apparatus; there is a typewriter that has been digitalised for Twitter, an old-style camera (Graflex Speed Grafic Camera from 1939) that works with Instagram and a 1956 Gibson electric guitar that has been customized for SoundCloud. These contemporary redesigns are all part of the ‘mixing the old with the new’ that makes ‘Station to Station’ a unique project. The idea itself of a travelling arts project follows on from the old, traditional travelling band or the travelling theatre production, but in this case beautiful, old classics are transformed into something with contemporary significance, without ruining their iconic, aesthetic appearance. The importance of social media in the way this project works is unparalleled; these old, classic instruments of creativity have been synchronized with internet-sharing methods that have become of huge importance in the world of communication. This is especially as we live in a world where a young musician or artist can go from being relatively unknown to a global sensation overnight because of a clip on Youtube. The whole trip will also be documented day by day in an online diary, so viewers everywhere can find out what’s happening on the train as it travels from place to place.

It really cannot be emphasised enough how exciting a project this is, especially because of its determination to use proceeds to financially support innovative, art installations in contemporary art spaces that are usually dedicated to non-digital, traditional pieces of sculpture or canvas work. The multimedia and also inter-media elements of ‘Station to Station’ mean it’s unparalleled, as far as many digital festivals go, in aiming to combine different art events and aspects in one show; only Sónar Festival in Barcelona could compete in this aspect; this year saw Kraftwerk performing with a backdrop of a digital lightshow. No other art project to date can compete with ‘Station to Station’ in aiming to put communities into contact with innovative, multimedia and digital art and design because of the fact of its mobile setting. We can only hope that the idea will inspire the creation of similar ‘travelling’ events all over the world, in order to promote and teach about the possibilities of working with new media in the arts world.