Peru: flying drones at the service of archeology

Mapping and protection of the archaeological sites

Very often archaeological sites are in remote and hard-reaching areas. Drones, frequently used for military purposes in inaccessible territories, are increasingly used for civilian purposes. In Peru, archaeologists more and more often make use of drones to speed up the survey works and protect the sites from squatters, builders and miners. 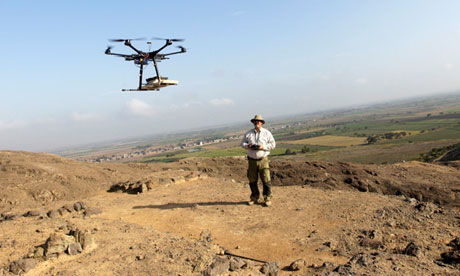 “Thanks to the remote-controlled drones we can get pictures and videos of the archaeological sites which enables us to produce digital maps and 3D models”, explains the archeology students Shelly Miller. “Through these data we can monitor the archaeological areas and discover walls, courtyards and the city framework, in order to individuate yet undiscovered evidence – continues Professor Luis Jaime Castillo – “With this technology, I was able to do in a few days what had taken me years to do”.

In Peru, with the use of drones, researchers are now picking up the pieces of a pyramid near Lima, believed to have been built 5000 years ago by a fire-revering coastal society and razed in July by a construction firm. The same month, residents of a town near the pre-Incan ruins of Yanamarca reported that miners digging for quartz were damaging the three-storey stone structures. And squatters and farmers repeatedly tried to seize land near important sites such as Chan Chan, on the northern coast. Archaeologists say drones are very useful to avoid such a kind of damages and to create a digital repository of ruins that can help in the reconstruction of the areas.

They think it is only a matter of time before drones replace old tools still used in their field and technology is used for less destructive uses.