Olivetti: over 100 years of culture and innovation 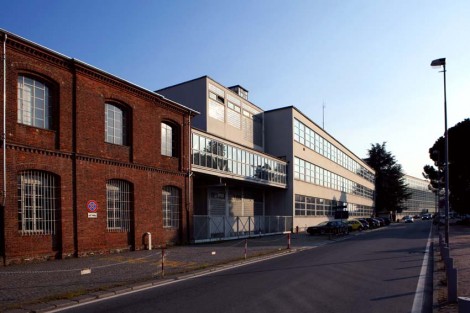 Olivetti building complex, along Via Jervis in Ivrea (from the first red-brick factory to the first and second extension of the Olivetti I.C.O. plants). Courtesy of Francesco Mattuzzi and Fondazione Adriano Olivetti

Since the first Italian factory of typewriters, created in Ivrea by Camillo Olivetti, more than 100 years have passed. Piedmont’s city Ivrea even now remains symbol of the project of a worldwide popular enterprise.
On occasion of the firm’s centenary, in 2008 the Fondazione Adriano Olivetti opened a new operating seat in Ivrea, at Adriano Olivetti’s house, with the aim of converging culture, knowledge and innovation towards the development of business, higher education and research institutions in Piedmont.
As the future of local communities depends on their ability to exploit the present knowledge, Fondazione Adriano Olivetti started in 2008 a multi-year programme for the development of the Knowledge Society (so called in the Lisbon Agenda).
Acting locally with a European and global perspective, the Foundation launched with this programme two lines of activities which are still running: the first aims to enhance the architectural heritage of the industrial city of Ivrea, a concrete example of the Olivetti business model that links industrial production to social relations and actors in the region. An important milestone has been reached in this regard with the nomination of Ivrea as a candidate UNESCO World Heritage site. The second aims to research and study the knowledge society and knowledge economy aligned to the themes and objectives of the Europe 2020 agenda.

According to the strategic lines within Agenda Europe 2020, the intellectual capital that lies in the enterprises and the community of a territory are essential elements for the development of the so-called systems of collective intelligence. The enterprise, as Adriano Olivetti observed, has the responsibility to invest in such systems, for creating growth and value in the area wherein it develops.
What is then the real legacy of the Olivetti experience? Theoretical teachings or practical suggestions?
The Fondazione Adriano Olivetti has always seen this complex, tangible and intangible, cultural heritage as creative instrument, useful for rigorously interpreting contemporary social, economical and cultural challenges and for orienting active and independent research on world culture.

The editorial activity arisen from the programmes has gone on in 2013 and 2015. The papers are available online on the Fondazione Olivetti website.