In the manufacturing process, for instance the production of kids toys, a wide variety of basic technologies are employed to create real-world tangible reproductions from 3D digital models. 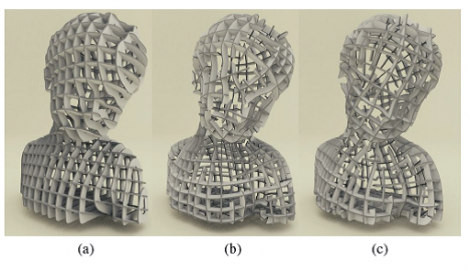 Rapid prototyping, developed over the last decade, with the modern devices enables almost exact copies of a given shape to be reproduced. But the printer and reproduction material’s costs are high and rapid prototyping, in despite of its high reproduction accuracy, ends up being too expensive for the mass market. A few years ago, radically new paradigms for shape fabrication were proposed, aimed at drastically simplifying the overall printing procedure by fabricating plausible representations of the digital models instead of their exact copies and based on the concept that approximating an object does not necessarily mean there will be a visual deficit.

The classic situation of two connected slices: for each piece we create a rectangualr slit in correspondence with the intersection line

Paolo Cignoni, Nico Pietroni and Roberto Scopigno from the Visual Computing Lab of Pisa’s CNR and Luigi Malomo from the Computer Science Department of Pisa’s University redesigned the traditional slice-interlocking approach, in order to approximate generic 3D surfaces with greater flexibility. They developed the Mesh Joinery, a novel strategy to fabricate illustrative shape approximations based on ribbon-shaped planar slices, which compared to the classical approach based on simple planar sections reduces the physical constraints that limited the design of free form surfaces and allows for more complex structures. Such slices can be easily and cheaply fabricated using any 2D cutting device (and therefore very inexpensive materials, like wood or plexiglass). 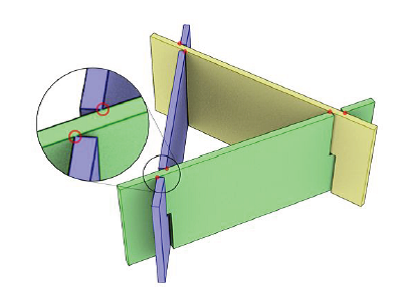 Three non orthogonally interlocked slices.
The red dots denote where the slices are pressed against each other: the friction ensures the stability of the structure

With Mesh Joinery, the four experts extended the classical slit mechanism that was used for planar joineries by providing additional structural degrees of freedom. In particular, they considered insertion movements that are not orthogonal to slices and formulated non orthogonal slice placement. Slice placement is driven by an input cross field, a mathematical entity that catches the overall structure and curvature of the object and therefore is able to provide  a set of appealing, uniformly distributed polylines lying on the surface of a mesh that well represent the intial shape. The method of mesh joinery yields arrangements that are practically, easily assemblable and exhibit a sufficiently robust slice structure.

The classical interlocking mechanisms between planar slices are bound by two hard constraints:

Obviously, these two constraints reduce the range of possible shapes that the slice-interlocking method can be applied to. Cignoni, Scopigno, Pietroni and Malomo overcome this problem explicitly relaxing the two constraints. 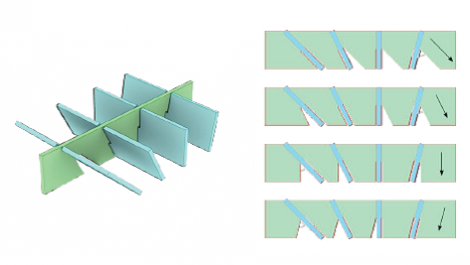 First of all, they made the slices interlocking non-orthogonal by widening the joint slit just right to keep the necessary pressure/friction between the slices (easier said than done!), such that the stability of the structure was ensured. Enlarging the slit (trapezoidally-shaped), they then made possible that the direction of many insertions was not parallel to many intersections. At the same time, they kept some insertions parallel with at least some intersections segments in order to hold all the pieces of the structure steady. By relaxing the orthogonality and parallelism constraint, they thus considerably increased the resulting expressive power of their technique.

Their method is particularly efficient in terms of production costs and could be attractive in specific markets, e.g. in artistic or illustrative contexts, in puzzles or toys and where assembly is a key part of user experience.

To this day, no existing fabrication paradigms are able to represent such complex objects as those realised with the mesh joinery method.