Detailed catalogue of over 12,000 archaeological sites in Jordan is now online 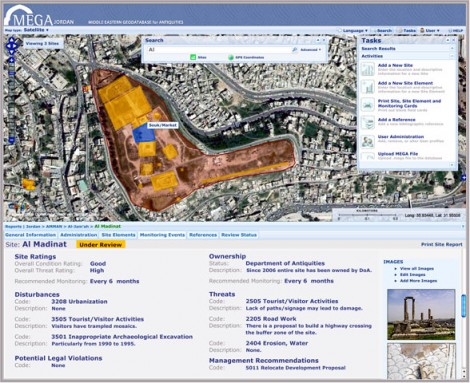 View of the MEGA-Jordan user interface, which system users access through a Web browser (example data only)

MEGA-Jordan is a purpose-built geographic information system (GIS) to inventory and manage archaeology sites at a national level. It has been developed using state-of-the-art technology and requires no more than basic computer skills to enter site and site element boundaries and buffer zones; site details such as condition, threats, and other monitoring updates; and to print out detailed, up-to-date reports on Jordan’s vast number of archaeological sites. The system, in both Arabic and English, is web-based and will standardize and centralize data throughout the Kingdom of Jordan.

Very easy-to-understand tutorials are immediately available to users for an immediate access to the resouces of the system. Beside visualizing the maps of archaeological sites, the system allows to view and print reports and to export data, and to add and edit new sites for a constant updating.

A dissemination article by Gaetano Palumbo, Program Director, North Africa, the Middle East, and Central Asia at the World Monuments Fund, appeared on the on-line magazine The Art newspaper:

Jordan is a country with an extremely rich archaeological heritage. Many sites, like Petra and Jerash (Gerasa), are internationally renowned, but there are dozens more that could attract visitors if they were well presented and run. And then there are thousands of others whose value to the scientific and research communities are poorly appreciated due to the lack of precise information.

In the early 1990s Jordan was one of the first countries to adopt a computerised system for cataloguing its archaeological assets. That system, known as Jadis (Jordan Antiquities Database and Information System), was relatively simple, without a graphical user interface, but capable nonetheless of providing information on over 9,000 archaeological sites, gathering the data from hundreds of excavation reports archived at the Department of Antiquities in Amman.

However, the database was unable to provide information on the status of conservation at any given site. Furthermore, Jadis only identified a site by means of a dot, making it impossible for researchers to know the exact “footprint”, an essential factor when evaluating the potential impact of new constructions or activities incompatible with the monument’s conservation.

Since 2007 the Getty Conservation Institute (GCI) and the World Monuments Fund (WMF) have been working with Jordan’s Department of Antiquities to develop a new programme based on an open-source GIS (geographic information system) web system, which uses Google Earth as a cartographic base. The Middle East Geodatabase for Antiquities (Mega), now consultable online at www.megajordan.org, contains information on around 12,500 archaeological sites. Besides marking out the perimeters of every site on a relief map of the terrain, the database further allows users to pinpoint the presence of specific elements within the site such as buildings, epigraphic or decorative features, and in theory also the position of every find, as well as the cultural and chronological framework to which every element belongs.

The other important aspect of the project is the methodology used for data gathering on the ground, from mapping and GPS to the evaluation of the conditions of the sites and the risks to their integrity. The system, now fully functional, will allow the Department of Antiquities to better manage the cataloguing system and, thanks to up-to-date information, prevent potential damage to the country’s archaeological heritage. Looking ahead, the system will also make it possible to identify zones that have yet to be fully explored archaeologically, directing new research efforts there, and will become a precious tool of knowledge for all those who have an interest in the history and archaeology of the Middle East.

The GCI and the WMF are now involved in the development of Mega-Iraq, a program with an architecture and an interface similar to Mega-Jordan, that will soon allow the State Board of Antiquities and Heritage in Baghdad to catalogue the country’s thousands of archaeological sites, historic centres and buildings. 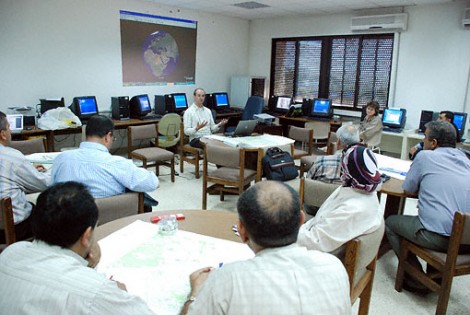 Jordan has taken a pioneering role in implementing and fully integrating the use of MEGA-J. into the DoA’s daily activities, and in training colleagues from the region. The DoA is proud to welcome colleagues from regional departments of antiquities (Palestine, Syria, Kuwait, United Arab Emirates and Iraq), in the hope they will be the next countries to implement the MEGA system.

Departments of Antiquities of Jordan: http://www.doa.jo/