The Museum emphasizes the role of the arts and technology in global society, and creates a fresh vehicle, and opportunities for integration of artistic and cultural understanding worldwide, allowing a greater demographic exposure to the arts. The arts have proven value in enhancing quality of life and economic prosperity for cities. With Streaming Museum, art of all cultures is presented side-by-side symbolizing society’s global interconnectedness and the valuable contributions that all cultures provide.

Launched January 29, 2008, Streaming Museum has just celebrated its fourth anniversary on January 31 with the US premiere of “Emotion Forecast” and “Occupy Wall Screens“, real-time artworks by the renowned French artist Maurice Benayoun. 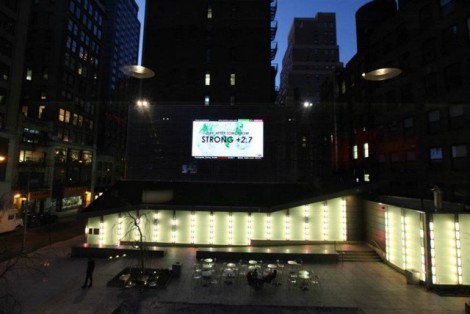 “Emotion Forecast” reflects on the notion of the Internet as the nervous system of the world. It takes data from the Internet that measures 48 emotions on websites related to current events in more than 3200 cities worldwide, researches proximity of emotions and locations, and forecasts the tendencies for the next 2 days. It relies on a free software program to accumulate data from the web using algorithm searches for sixty-four emotions from 3,213 cities. In other words, it counts how many times people in a certain geographic area use words like “happy” or “fear” on Facebook etc. At the same time every day, the software analyzes a snapshot of the collected data and calculates predictions about how the world will feel over the next two days. Reminiscent of weather forecasts, the data is presented visually by superimposing the emotions, written out in words, and their corresponding figures, over a world map. 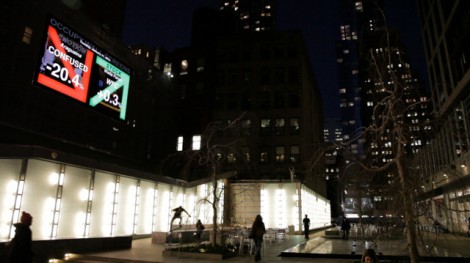 Playing on familiar visual symbols from the financial world such as stock tickers and Bloomberg-style news programs, “Occupy Wall Screens” portrays the quotidian in a new light.

The exhibition was on view for one month at Big Screen Plaza in New York City and through 2012 at StreamingMuseum.org.

“Emotion Forecast” and “Occupy Wall Screens” are part of Maurice Benayoun’s ongoing series on the “Mechanics of Emotions” which translate emotions into maps and performances, and also created the interactive installation “Emotion Vending Machine“ 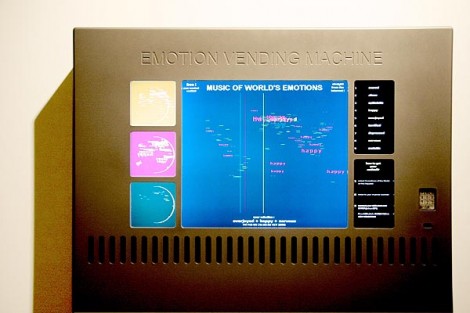 The “Emotion Vending Machine” is displayed like a vending machine for drinks or cigarettes. Just as for any automatic vending machine, the user can choose among a list of products, here the emotions of the world are shown within the frame of dynamic cards reactualized in real time based on the web datas. If, for example, the user selects “scared”, “ecstatic”, and “terrified”, he obtains a musical cocktail.

Maurice Benayoun is a pioneering new-media artist whose work has been seen, and honored, around the globe. Born in Mascara, Algeria, in 1957, Benayoun is based in Paris, where he lives with his family. His work employs various media — including (and often combining) video, virtual reality, the Web, wireless technology, performance, public-space large-scale art installations and interactive exhibitions.

And he says “Defining myself is always a difficult question because I’ve changed my title many times. Multimedia explorer, artiste plasticien, conceptual artist… and now I just say Open Media artist — the result of the evolution of the media the artist can use. We don’t have to use just painting and sculpture anymore; we can use video, film, Internet, virtual reality, augmented reality, installations and so on.”