We sum up and rebound this article by Neil Bennet, source: DigitalArts magazine, with surprising stories and an interesting analysis about the creative industry for cinema Visual Effects. 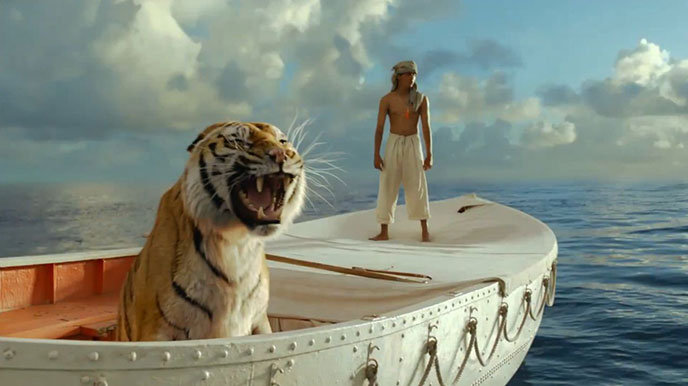 Life of Pi‘s Oscar win for visual effects offers a sobering reflection on the precarious financial state of much of the VFX industry.

That Life of Pi picked up this year’s gong was no surprise. Following Hugo‘s win last year it appears the Academy is – as with the other categories – finally favouring use of VFX for emotional resonance rather than who can make robots explode with the most accurately rendered shrapnel. Life of Pi‘s beautifully art-directed CG is by turns elegant and epic, while its synthetic animals are more than just superbly renderings of fur and hide – they’re wonderfully realised characters that easily manage to out-act Rafe Spall.

What might shock you though, is that the main provider of VFX for the film, Rhythm & Hues, filed for bankruptcy protection in the US on February 13 after a mooted sale to Prime Focus, requiring a bailout from Legendary Pictures to finish work on fantasy film Seventh Son. This is no small shop: the company created VFX last year for effects-heavy teen fare including The Hunger Games and Snow White and The Huntsman, and employed 568 people across five nations on Life of Pi alone.

The huge scale of its work in pure stats alone – handily compiled by Autodesk as unsurprisingly its CG tools were use to create much of the VFX – gives you some idea of what it cost R&H to create the VFX: 446 stereoscopic shots, a CG tiger with 10 million hairs, 5,000 rendering processors. And then there was the mere matters of the colossal R&D required to develop these and the artistry involved in making the animals and world ‘live’.

In the same week as filing for bankruptcy protection, it shed 254 of its 768 employees, according to court filings cited by the Wall Street Journal. The troubles even lead to a protest outside last night’s Oscars, with the image below widely shared around Facebook and Twitter.

Sadly, financial woes are an industry-wide issue for larger, global post houses. It’s easy to write-off the near-demise of another grand dames Digital Domain in September to an apparently poorly conceived attempt to set up its own animation studio and school – which is perhaps ironic as diversifying into other areas was often cited a few years ago as one of the big growth areas for the industry – but it’s clear that things are hard all over.

So how is the industry so troubled when the film business seems somewhat resilient in the face of a recession – especially when common wisdom has it that VFX-heavy films often provide exactly the kind of escapism audiences demand in times of austerity? The perception is that the industry is spending too much money and not getting paid enough. Some feel that the VFX industry itself is to blame: agreeing to lower budgets in the face of increasing film company – and audience – demands, willingly signing up to do more and more unpaid pitch work, and letting filmmakers get away with more costly changes than have been costed in.

We’re in a post-VFX age. Composited CG elements and digital manipulation of video are as inherent to the filmmaking process as editing, production or costume design. Filmmakers need to ensure that VFX houses are given compensation for their talents, but they also need to focus on creating elements that add to the power of a film – eschewing just piling on complexity instead of adding truly special effects.