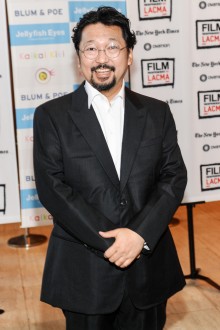 The first animated feature film by renowned Japanese artist of the 90s, Takashi Murakami debuted in L.A’s County Review of Art on Tuesday.

“Though a children’s film that mixes live action with CG animated characters, Jellyfish Eyes is deeply personal to Takashi Murakami, and may serve as an introduction to his artwork. The movie tells the story of Masashi, a young boy living in a post-Fukushima world who moves to a mysterious town where children battle remote-controlled pets called “Friends.” Masashi develops a special connection to his own Friend, Kurage-bo, who has “eyes like a jellyfish.” True to Murakami’s style, the Friends come in all shapes and sizes from the giant gray bunny Luxor to an anime maid named Ko2. Unbeknown to them, the Friends are part of an alien plot to transform their negative, fighting energy into a super-monster, recalling 1960s Japanese monster films like Godzilla and elements of ET.”