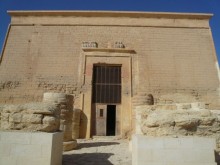 Italian archaeologists have uncovered a treasure trove of ancient scripts, potsherds and statues at an excavation in Egypt.
The dig, headed by scholars from the University of Siena (throught the “Dipartimento di scienze storiche e dei beni culturali” directed by Prof. Emanuele Papi), revealed objects such as nearly 100 papyrus scripts, potsherds with written text and statues of pharaohs and important priests.

The findings were made at the ancient site of Dionysias*, which dates back to the third century BC and lasted until the sixth century AD, and has been under the Siena-led excavations since last year. 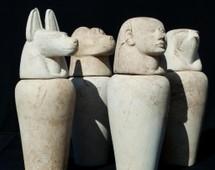 Past findings in the area include streets, neighborhood blocks, homes, oil mills and chapels near a temple devoted to the crocodile god Sobek, one of the best examples of its kind.
Inside the temple, archaeologists have unearthed numerous secret rooms and hidden crypts beneath the pavement, with sophisticated openings and tunnels.

These findings, realized with the aid of advanced technology, will be studied in the next months. In the past years Prof. Papi is engaged in archaeological research on the southern and eastern Mediterranean, Greece, Jordan, Egypt, Tunisia, Algeria and Morocco.

* Dionysias is a site founded in the Ptolemaic period and it located 100 km south of Cairo.
The site was fortified during the Roman era by Emperor Diocletian to protect it against the attacks of Bedouins. Much of the site is now buried by sand.

More information will coming soon on: