Half a million images of historical value, available online

The BT Digital Archives was created through a collaborative project between Coventry University, British Telecom and The National Archives. It was funded by Jisc as part of their Content programme between November 2011 and July 2013. 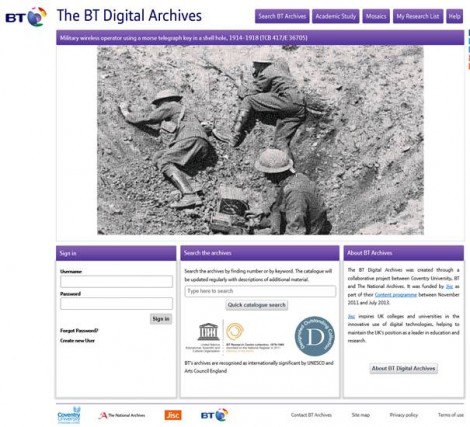 After a simple registration, the user can access to almost half a million images from this internationally significant archive – as recognised by UNESCO and Arts Council England.

The features of BT Digital Archive include the following:

and a questionnarie is currently circulated for evaluating the services from the user’s point of view. It is therefore possible to complete this evaluation form and return to dr. Darshna Patel – DPatel @ cad.coventry.ac.uk – of the Serious Games Institute at Coventry University by 4th December 2013.

BT is the world’s oldest and most established communications company, its roots date back to 1846 and very few companies in the world have a heritage as rich as BT. Its history is a fascinating weave of invention, innovation, and endeavour – both as a public service and as a private enterprise.

BT Archives documents the leading role that the UK and BT and its predecessors have played in communications technology development from its very beginning, rolling out communications services around the country and across the globe, and the profound impact they had on society and in improving people’s lives.

Moreover, as said by professor Neil Forbes of Coventry University, Director of Research: “An important aspect of this online archive is the opportunity it provides to those engaged in studying and learning:  BT Digital Archives adds significantly to the online resources available to the education world – especially the further and higher education sectors –  by offering scientific, cultural and historical material for use by teachers, students, practitioners and researchers all over the world.”

The overall collection includes records, photographs and films of BT itself, records of the Post Office telecommunications function, and of the private telephone and telegraph companies taken over by the Post Office in the nineteenth and early twentieth centuries. They document the development of the UK communications infrastructure and services to overseas from their earliest days, and major milestones such as the development of transatlantic communications from the earliest telegraph service to satellites and fibre optic cables.