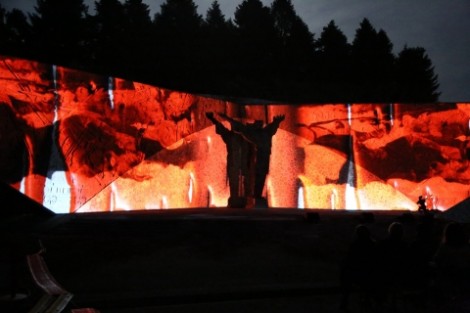 On the 18th of October 2013, on occasion of its 40th anniversary, Gornja Stubica’s Museum of Peasant Uprisings celebrated with a 3D mapping event called “Gubec Teatar”, commemorating the Great Peasant Revolt of 1573 and its leader Matija Gubec, national symbol of justice.

The multimedia show made the Monument of the Great Peasant Revolt alive with the richness of visual effects and the artistic 3D video mapping, put up around the 40-meters-long monument created by the Croatian sculptor Antun Augustinčić, which realized its work in 20th Century on the base of the literary masterpiece Ballads of Petrica Kerempuh, written by Miroslav Krleža in 1935-36. 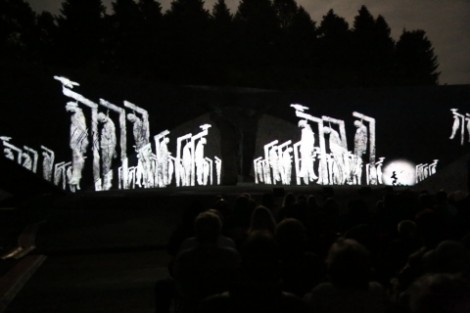 In the 3D exhibition, the museum made a virtual reconstruction of the Revolt historical setting by using animation techniques accompanied by 16th and 21st century music. The spectacle, which more than 1000 people took part in,  was patrocinated by Ivo Josipovic, president of the museum. 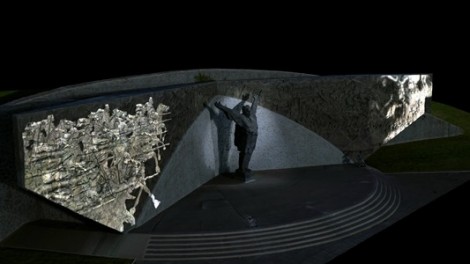 Monument of the Great Pesant Revolt

The 3D video-mapping was realized by Pago com. Ltd, 5/Group member, in collaboration with Novena, and produced by Goran Pavicic. The screenplay was written by Goranka Horjan, multimedia development done by Ervin Šilić and animation by Goce Vaskov. Audio recording and digitization by Digimark Ltd.