We describe the world by using words. Yet, words usually bring to mind different mental views of the world in different individuals, because of their personal experience and context. This is the reason why the “semantic gap” between our conceptualizations of the world, expressed using language, and our experience of the world, whose most direct representations are media, is far beyond the reach of current systems; and it is also why, so far, a universal solution of the problem of contextualizing search, navigation, and media management in general to the user needs and the operating environment has not been found.

The first key intuition of GLOCAL is to use events as the primary means for organizing and indexing media, e.g., photos, videos, journal articles, and email exchanges. Instead of starting from media and seeing, a posteriori, how we can meaningfully understand their contents (e.g., by tagging them), we organize a priori our knowledge in terms of events and use media to populate them with memories, thus providing their experiential dimension.

Events provide the common framework inside which the local experience-driven contextual information can be not only coded, but also shared and reduced to a common denominator. Events have both a local and a global dimension. The local dimension enables the mapping of tags (conceptualizations) to media (personal experiences), while the global dimension enables the sharing of event descriptions (thus enabling social sharing and networking of events, media, and tags) but also of event structures across similar events, thus providing a common way to index media (social sharing and networking of event structures). In turn, the networking of events and event structures enables the creation of networked communities inside which common (global) descriptions of the world can be built and continuously enriched by the continuous flow of individual (local) descriptions. 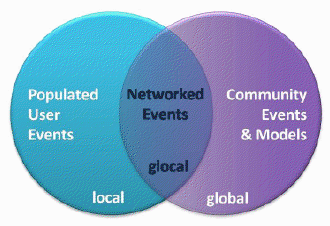 The second key intuition of GLOCAL is to exploit the local and global (GLOCAL) knowledge about events and related contents to locally index media and experiences and later to globally share them within networked communities, thus lessening the impact of the semantic gap. The idea is to define suitable models that describe and share the semantics at various levels, so that each user can organize their personal experience into events, share the description of events with other peers in a networked community, and make the local system evolve in time, benefiting from and enriching universal knowledge constructed in time via agreements. 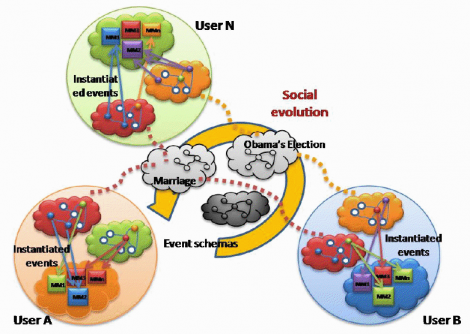 On the basis of the above concepts, GLOCAL introduces a new approach to media search that we call GLOCAL search. The key ingredients of GLOCAL search can be summarized as follows:

With two leading search companies and four content providers, the GLOCAL consortium is able to realize and evaluate the GLOCAL approach in several application domains, involving professional and amateur users who deal with professional and generic contents.

The project is about to be ended in November 2012, and the key scientific and technological objectives that are going to be reached are the following:

Latest news from the project