Now showing in Stockholm, the exhibition is a high-technology experience

“Etruscans in Europe”, the travelling mulimedia exhibition produced by Historia – an Association for the spreading and the conservation of Italy’s Cultural Heritage. The display, created with the technical collaboration of the Bruno Kessler Foundation, has moved on to Stockholm until September 2012.

The exhibition is an extraordinary voyage of discovery of an ancient people who lived in Central Italy between the 9th and 2nd centuries BC. The tour of the exhibition features video facilities using excellent images recorded in the original sites and in 18 prestigious Italian museums. The visitor can discover the great Etruscan civilisation on a single visit which will bring them from the origins through to Romanisation, by way of the great and powerful cities of the period, showing how everyday life was lived inside homes, clothing worn, the world of the hereafter, and Etruscan art using gold, ceramics and bronze.
Numerous images of original objects and virtual reconstructions are rendered in 3D using special technology which allows viewing on dedicated screens with and without the help of two-colour filter glasses. 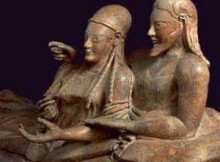 The all-multimedia exhibition uses the anaglyph technology (bi-color glasses) to let visitors have a 3D experience of the main Etruscan archeological sites, accurately reconstructed after the original sites.

The pathway runs along six halls where a series of big monitors and screens (over 30) narrate the world of the ancient Etruscan people with dramatic videos, animations and 2 and 3 dimension images.

Within the exhibit, two stations allow visitors to stroll and discover the Necropoleis of Banditaccia di Cerveteri (Rome) and Monterozzi a Tarquinia (VT), both UNESCO World Heritage. They will also have the chance to appreciate the virtual tour of the Tomba della Scimmia in Chiusi (SI): the application, which can be viewed on an almost life-size screen, is a multimedia production based on panoramic images, by means of which visitors can walk through the ancient streets of the necropoleis and to go down through the dromos into the tomb chambers, usually closed to the public. Simple controls by the users take visitors into the famous Tomba dei Rilievi, the only one in the world, which comes face to face with the precious paintings of the Tarquinia tombs.

The contents of the previuos Trento display have been expanded by adding a number of new 3D and 2D tombs and a new “augmented reality” station, produced by NoReal in Turin. Visitors can, through a camera which reads the body’s movements and processes them in real time, move with their hands virtual 3D objects stored at the Museum in Chianciano Terme (SI).

In support of the technological section, the exhibit offers 3D digital giant posters of Etruscan objects and iconography, video screenings on the excavation period, the opening of the tombs, the niches and the finding of bones inside them.
Texts have been curated by Elisabetta Siggia from the Museo Nazionale Etrusco di Villa Giulia in Rome.

The survey and three-dimensional modeling (3D)  of the Etruscan tombs and objects were produced by the 3DOM (3D Optical Metrology) Unit at the Bruno Kessler Foundation in Trento.
3D models are viewed both mono- and stereoscopically and 3D animations can be appreciated thanks to anaglyph glasses (bi-color), a technology which allows an “immersive” experience in the etruscan hypogeums.

Surveys and 3D modeling allowed the production of a high resolution “color photocopy” of the finds. Besides having a high resemblance with the original, the gathering of digital information relating to wall, ceiling and floor surfaces allows to preserve important UNESCO sites, to study specific renovation and conservation policies, and to produce an accurate reproduction in any place and time.