Emissary in the Squat of Gods, by Ian Cheng

From April 23 to August 30, 2015, Fondazione Sandretto Re Rebaudengo presents “Emissary in the Squat of Gods”, a solo exhibition of Ian Cheng, curated by Hans Ulrich Obrist, Director of London’s Serpentine Galleries. 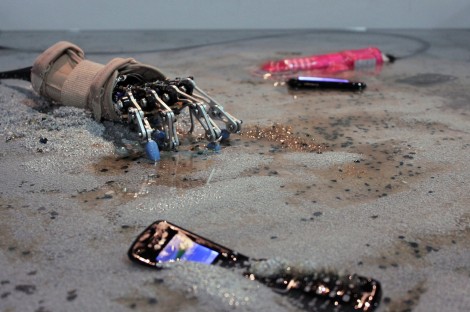 The young American artist (born in Los Angeles in 1984, he lives and works in New York) has benefited from a multi-disciplinary education in both science and the humanities. After earning a degree in cognitive science at Berkeley University in California, he specialised in Visual Arts at New York’s Columbia University. He went on working for the prestigious Industrial Light & Magic, one of the best known American digital special effects companies, founded by George Lucas.

In Cheng’s works, the protagonist is technology, viewed as the product of the natural evolution of human nature, which today has the power to modify our bodies as well as our perceptual abilities.

The recurring themes in the artist’s production are the evolution of emotional intelligence, the complexity of the human mind, its perception of the surrounding environment and the resulting response to external stimuli. The devices he employs are the latest artificial intelligence systems, technological experiments such as the Oculus Rift, i.e. screens that can be worn like glasses, software that has a life of its own and video installations.

His works are often videos that have no beginning and no end, conceived like living realities that flow in real time, unrecorded. They are peopled by humans, plants, living and non-living objects, defined by their specific behaviour within larger ecosystems, which in turn obey rules of their own. These ecosystems have a neuter, undifferentiated appearance and contain no geographical references. Just magnetic fields whose energies move characters in multiple directions. 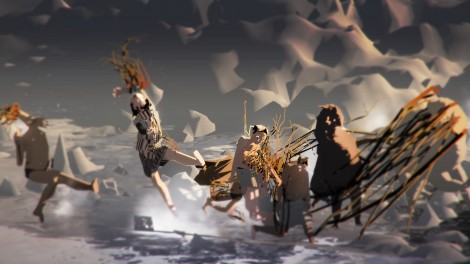 During the video, the animation begins to slip out of the control of its creator, taking on unpredictable shapes and developing a life of its own. The different protagonists respond to ever-changing stimuli, obstacles and situations, they interact with and influence each other in ways impossible to predict. The artist describes them as evolutionary algorithms, combinations that constantly change their shape, software that generates parallel realities, definable not so much as artificial “mechanisms” but rather as continuously and unpredictably evolving “organisms”.

As Ian Cheng tells to Hans Ulrich Obrist in the interview that will be published in the catalogue: «If you can imagine something that’s in-between the genre of a video game and the genre of a movie: it’s that. So it’s kind of like a living story, I call it a “smart-story”, not because it’s intelligent, but in the way of a smartphone or a smart-house, where you see the phone or house not as an inert object but as an organism. So if you can, imagine a story that has a life and not a metaphorical life, but a real life which means it can change its script a little bit, it can adjust and take on randomness, the way an organism can take on randomness in real life. It’s a narrative that has the capacity to change itself».

Seen from this perspective, Cheng’s work can be a way to reflect on the limits and possibilities of the human and as an attempt to redefine models of relationship between the complexity of the human mind and a changeable external reality. The fact that they lack a beginning and an end makes them the subject of one single, comprehensive reflection.

For his solo exhibition at Fondazione Sandretto Re Rebaudengo, Ian Cheng presents a work that is still in progress, the first episode of a new film series entitled “Once Out of Nature”, a trilogy dedicated to the history of cognitive evolution. This first film concentrates on the development of conscience and was inspired by the works of the American psychologist Julian Jaynes. «Jaynes says that humans did not develop reflexive, introspective consciousness up until three thousand years ago, which is quite recent. The film relates back to Julian Jaynes’ hypothesis that our subjective consciousness actually came from a very social phenomena of understanding, or not understanding, the consciousness of other people and thereby developing consciousness to bridge that gap within them. And it suggests that the consciousness we experience is very much a social phenomenon rather than an intrinsic biological one» Ian Cheng explaines.

At the inauguration of Cheng’s exhibition, on 23 April, Isabel Lewis (born in 1981 in the Dominican Republic, she lives in Berlin) will present one “occasion” of hers. Considered a celebratory and sensory gathering of things, people, plants, music, dance and smells, the “occasion”, term coined by Lewis herself, is a social meeting place that situates itself somewhere between a bar, a lecture and a salon.

Lewis’ dramaturgy, which includes speaking, DJ-ing, dance and smells by Norwegian chemist and smell researcher Sissel Tolaas, will create an environment tuned into the energies of each occasion and its attending guests. Easing the formalities of distanced observation, often found within a theatre or exhibition context, Lewis offers a space of relaxation where the entire human sensorium can be engaged. Visitors will be greeted with a drink and a light bite to eat and can come and go as they please throughout the occasion.

Read the article in Italian language

For further information visit the Fondazione Sandretto Re Rebaudengo website!