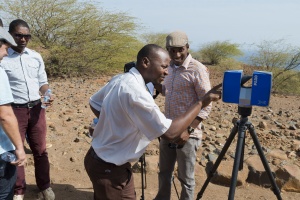 At the beginning of March 2015, CyArk undertook a project for the digital documentation of the UNESCO World Heritage Site Cidade Velha (“Old City” in Portuguese), which is located in Santiago, the largest of the 10 islands belonging to the Cape Verde archipelago. The project offered the opportunity to conduct a training workshop in conjunction with the African World Heritage Fund, at its Risk Preparedness Field Project.

Thirteen experts participated in the workshop, as representatives of heritage sites from Guinea-Bissau, Brazil, Mozambique and Cape Verde. Goal of the initiative was to increase the heritage practitioners and local communities’ skills in risk management, conservation of the sites and preservation after a disaster; the workshop aimed moreover to enhance networking among practitioners and communities in order to deal with on-site challenges at World Heritage Properties.

CyArk participated in the last week of the 3 week workshop to demonstrate how digital documentation is executed and how the resultant data can be used for conservation management, risk assessment and cultural tourism. The training gave site managers and authorities the ability to work hands on with the FARO Focus X330, Autodesk ReCap Pro and Memento software. 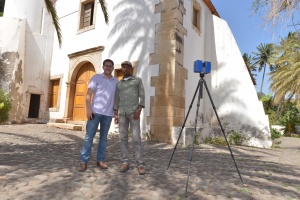 Nossa Senhora do Rosário church in Cidade Velha; built in 1493, it is the oldest colonial church in the world. Today, it sees continued use by the communit

The Cape Verde archipelago lies 500km west of Senegal in West Africa, a position that has historically offered strategic significance within the Atlantic. Cidade Velha, originally called “Ribeira Grande”, has its earliest colonial roots around AD 1460, when it was claimed by the Portuguese Crown and subsequently served as a key seaport for the transatlantic slave trade. Over the years, it attracted attention from various other European powers, being sacked by English and French corsairs. With the decline of the town in the 18th century and the shift of political and administrative function, nearby Praia (the modern capital of Cape Verde) become the preferred port of call.

Cidade Velha is the subject of an ongoing programme of excavation, conservation and restoration with work undertaken from the latter half of the 20th century to the early 2000’s. In 2009, the town became UNESCO World Heritage Site.