Cologne Cathedral to be digitally preserved 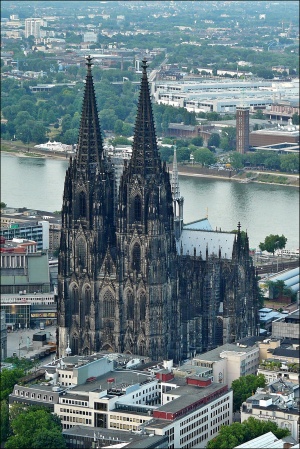 World heritage sites are under constant threat from natural and man-made events such as climate change, earthquakes, pollution, fire, vandalism, tourism and urban pressure. Cutting-edge laser scanning technology can provide accurate 3D records of these sites for conservation and management, as well as “digitally preserve” the site for future generations.
In May 2015, a team from the 3D Mind & Media degree course at Hochschule Fresenius, Faculty of Business and Media, in Cologne, under the technical direction from the School of Energy, Geoscience, Infrastructure and Society at Heriot-Watt University, Edinburgh, started utilising the latest 3D survey technology to digitally record the magnificent Cologne Cathedral World Heritage Site. The project will be supported by the city of Cologne and the Dombauhütte cathedral conservation.

How is it possible to digitally preserve one of the most important monuments on earth for posterity? In the 1990’s, Iraqi-American engineer Ben Kacyra developed a portable and high-definition laser scanner to enable 3D measurements. In 2003 he founded CyArk, a charitable organisation that aims to record for posterity cultural sites worldwide. After digitally preserving over 100 sites in the first years of the organisation, in 2013 CyArk launched the 500 Challenge to digitally preserve 500 sites in 5 years’ time. To date, over 60 have already been digitalised, including the four-thousand-year-old city of Babylon in Iraq, the sculptured heads of four former US presidents carved into the face of Mount Rushmore and the almost 900-year-old bridge over the Danube in Regensburg.
The work of CyArk and Ben Kacyra inspired Chris Wickenden, Director of the 3D Mind & Media course at Hochschule Fresenius in Cologne: why not also digitally preserve Cologne Cathedral for posterity as it is one of the many renowned monuments protected as a UNESCO World Heritage site? Together with Douglas Pritchard, his Canadian colleague from Heriot-Watt University and long-time CyArk partner, Chris Wickenden put his idea into practice and designed a unique student project. On 4th May, eight 3D Mind & Media students from Hochschule Fresenius began work on scanning the entire inside space as well as the external facade of the largest church in Germany. A further 6 students will document the academic process. By the end of the 3D project, Cologne Cathedral will be precisely visualised entirely in 3D for the first time ever.

CyArk Founder Ben Kacyra said «The CyArk 500 strives to inspire and connect the international heritage community in an effort to preserve our collective human memory. The world has experienced significant losses to our shared cultural heritage over the last few months from both human caused and natural disasters. I was delighted to learn of the proactive decision to record the incredible Cologne Cathedral for future generations ».

With over 10,000 students and vocational college students, Hochschule Fresenius is one of the largest and most renowned private higher education institutions in Germany. Founded in 1848 as “Fresenius Chemical Laboratory”, Hochschule Fresenius has been a state-approved privately run university of applied sciences since 1971. Today, it has campus locations in Cologne, Berlin, Hamburg, Munich, Idstein and Frankfurt am Main, as well as study centres in Düsseldorf and Zwickau. In 2010, Hochschule Fresenius received institutional accreditation from the German Council of Science and Humanities. Study, training and continued professional education courses can be taken at the faculties of Chemistry & Biology, Health & Social Sciences, Business & Media and Design. In addition to full-time Bachelor’s and Master’s programmes, the four faculties with their eight schools also offer part-time and supplementary study courses. Hochschule Fresenius values the close unity of research, teaching and practice.