Capturing the aging process through digital editing and video

Anthony Cerniello is a commercial and film editor who creates adverts and short films. His work formats also include music videos for indie and rock bands including the Yeah Yeah Yeahs and Kings of Leon. However, his most recent short film, uploaded via Vimeo only four days ago, is his most remarkable work yet.

‘Danielle’ is a five-minute video clip featuring a woman’s face as it goes through the aging process, which is performed through digital manipulation. While five minutes may seem like a short space of time to demonstrate aging, the slow, gradual changes the woman’s face go through demonstrate aging from a child to an elderly person. In the first few years of the woman’s life, although we realise major changes are occurring over around a minute in real time, they are so gradual, and seem so natural, that we feel as if no time has past at all. In fact, some of the changes are so gradual we don´t even notice them, and then, before we know it, Danielle appears about ten years older.

‘Danielle’ by Anthony Cerniello on Vimeo:

Cerniello’s describes his video as taking on from the “idea that something is happening but you can’t see it but you can feel it, like aging itself.” Using digital technology to capture feelings, in this case aging, shows some of the wonderful capabilities of art using digital media. The ability of motion that new media technology provides could give digital art an advantage over traditional art forms in recreating feelings. This is an idea not always recognised and taken full advantage of, but Cerniello shows the huge impact digital art is capable of making when artists decide to stop using new digital techniques to replicate traditional art forms, and move on to something new and different, that static art can’t do. 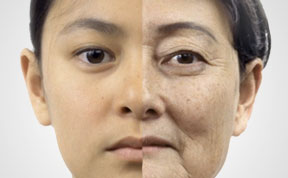 The mixture of change and consistency in the woman’s face may represent the aging process seen from a spectator who has seen the person grow up every day from a close vicinity – though change is inevitable, the person we see and know remains recognisable throughout the clip. This, together with the impeccable quality and use of digital editing, is what makes ‘Danielle’ such a success.