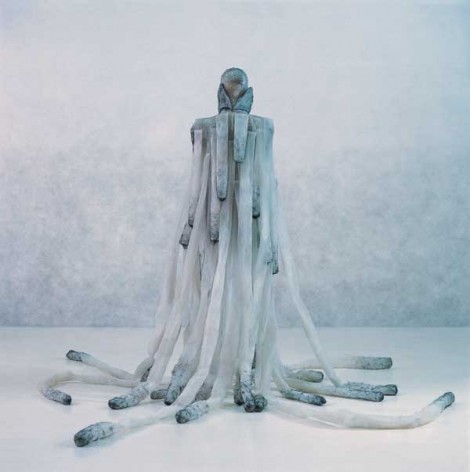 The first major U.S. exhibition of leading Chinese artist Lin Tianmiao*, Bound Unbound surveys the past 20 years of her captivating installations and sculpture. Through exquisite handwork using thread winding, embroidery, and sculptural processes, Lin Tianmiao has explored her interest in the human form. The exhibition comprises several new installations and many works never before seen outside of China.

One of Lin Tianmiao’s clearest recollections of her childhood in China was helping her mother sew clothes for the family. 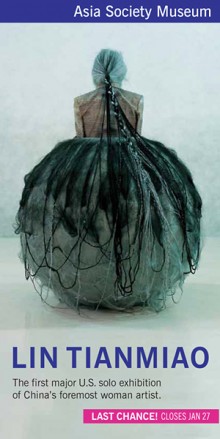 When she returned to China after spending eight years living in New York, she was inspired by this memory to create a technique she calls thread winding, where she winds silk or cotton thread around an object until it is completely covered and ultimately transformed. She used this in one of her first major works called The Proliferation of Thread Winding in 1995, which began her career as an artist and is included in the exhibition. Her use of the technique continues today and can be seen in such recent works as All the Same.

Lin Tianmiao’s paintings, sculptures, and installations have always been about a series of dual tensions. These are frequently played out in her works through contrasts between materials, but they are also evident in binary themes such as male versus female, function versus form, and physical versus psychological experience. Underlying all of these themes is a keen exploration of a physical experience, at times emphasizing the female body. We see this in the works Chatting and Mothers!!!.

Lin is one of only a handful of women artists of her generation born in the 1960s to have emerged during the 1990s when the Chinese art world was coming of age and gaining substantial international recognition. Her works over the past twenty years are as much about her personal journey as an artist as they are about a desire to articulate broader social issues. Through her focus on a female experience, she comments on the enormous social progress made in Chinese society during Mao Zedong’s tenure, yet she hints that some promises remain unfulfilled. Her consistent exploration of these issues, sometimes latent, makes her a significant artist of our time. This exhibition represents Lin Tianmiao’s first major solo exhibition in the United States.

* Lin Tianmiao was born in Taiyuan Shanxi Province, China, in 1961. She studied Fine Arts at Capital Normal University in Beijing, and then at the Art Students League in New York. For nearly a decade she and her husband, artist Wang GongXin, lived in New York City, where she designed textiles until the couple moved back to Beijing in 1994. Working across installation, sculpture, photography, paper, and video, Lin Tianmiao’s work has been included in numerous local and international exhibitions, such as: Focus: Works on Paper, Long March Space, Beijing, China, 2008; Global Feminisms, Brooklyn Museum, New York, 2007; About Beauty, House of World Cultures, Berlin, Germany, 2005; Mahjong: Works from the Sigg Collection, Kunstmuseum, Bern, Switzerland, 2005; Between Past and Future, International Center of Photography, New York; Asia Society Museum, New York; and Smart Museum, Chicago, 2004.